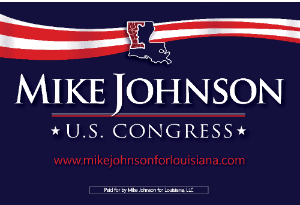 The seat is being vacated by Rep. John Fleming, who has stated his intention to run for the U.S. Senate.

“Washington, D.C. has grown completely out of control, and our country has lost its compass.  I’m running for Congress to defend our freedoms, restore our conservative principles, and get America back on the right course,” said Johnson.

Johnson’s announcement was made through social media and a district-wide media tour.

The announcement has been highly anticipated. Johnson has been proclaimed by media statewide as the early front runner in the 4th District due to his name recognition.

Johnson has deep roots in the district, as he was born and raised in Caddo Parish, lives in Bossier Parish, practices law with a firm headquartered in Webster Parish, and has family, close friends, clients and supporters from Union to St. Landry Parish.

“For nearly twenty years, I’ve been fighting to defend the Constitution and our Louisiana values in the courts, in the court of public opinion, and most recently in the Legislature,” added Johnson. “I think my record speaks for itself, and I’m ready to use that same resolve and common sense to take on the Washington, D.C. establishment.”

Johnson, a nationally recognized constitutional law attorney, was elected to the Louisiana Legislature in 2015 when 26th Judicial District Court Judge Jeff Thompson vacated his House seat.  After his first legislative session, Johnson was named an “MVP for Business” by the Louisiana Association of Business and Industry, “Outstanding Family Advocate” by the Louisiana Family Forum, and received an “A” rating from the NRA Political Action Fund.  Johnson was re-elected without opposition.

The primary election for Louisiana’s 4th Congressional District will take place in November.