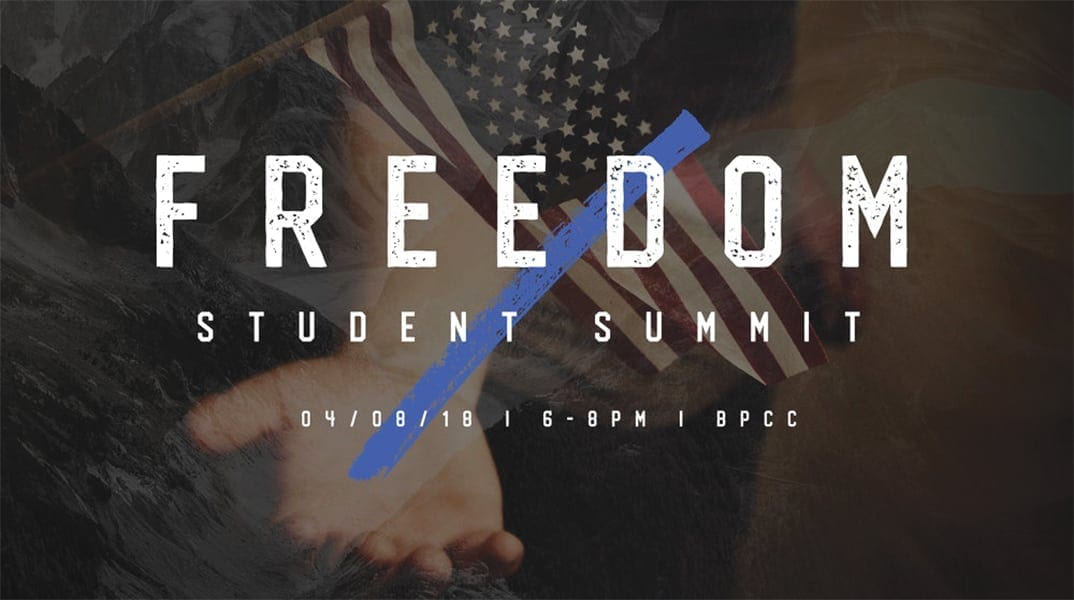 An event is being held this weekend that is designed to “set the record straight” on religious freedoms in public schools.

Freedom Student Summit will be held April 8 from 6-8 p.m. at the Bossier Parish Community College gymnasium.

The event was announced with a Facebook post by Congressman Mike Johnson (LA-Dist. 4) featuring a video message from outspoken religious actor Kirk Cameron.

“There’s a reason we call religious freedom our ‘first liberty.’ The founders of our nation listed it as the first freedom in the Bill of Rights because they understood how foundational it is to who we are as Americans,” Cameron says in the video. “Unfortunately, the right to religious expression has been challenged more and more and even misunderstood to the point where people believe our public schools are supposed to be some kind of religion-free zones. And at the Student Summit on April 8, we’re going to set the record straight.”

Johnson said via text message, “We are very excited about the Summit, and the opportunity to educate, equip, and empower students to stand for their fundamental freedoms. The right to religious expression has been increasingly challenged and misunderstood in recent years, and some lawyers and activists are trying to convince people that our elementary and secondary schools must be ‘religion- free’ zones.”

Johnson continued, “Thankfully, the law is still on our side. After defending religious liberty in the courts for nearly 20 years, I was always encouraged to know that most Americans cherish their freedoms and are anxious to preserve them. Events like this Summit help us explain how that can be done.”

The website www.istandwithbossier.com features more information and says it is designed to equip, empower and encourage public school students about rights to live out their faith.

“This is a call to prayer. Let’s join across the community to pray for our students and our schools. We encourage churches and students to meet leading up to the Freedom Summit and pray for our community. We draw a line, and that lines starts with prayer,” the site says. “Religious Liberty is real and valuable for all of us. Let’s stand with all of our students and their rights to live out their faith no matter the school, no matter the city.”

First Bossier Pastor Brad Jurkovich said his church is part of a group of local churches that have come together for this event.

“We’re very concerned any time religious expression is dampened or tried to be curbed. It is a First Amendment right. We want to affirm those rights to students and educate them.”

First Bossier is the home church of Congressman Johnson. Jurkovich said they are proud of Johnson’s push to educate the student population.

“We value religious liberty and want students of our entire parish to know they have rights and we stand with them. To know Congressman Johnson is involved in that, we’re excited and thankful for his leadership and expertise,” Jurkovich said.

The site even includes social media graphics for profile pictures and strategies such as, “We draw a line. We take a stand. Join the movement by drawing a blue line on your hand and posting a picture on social media, April 9th, 2018. Use hashtag #STANDUPBOSSIER.”

The summit follows a lawsuit involving seven families against Bossier Schools. Americans United for Separation of Church and State filed the lawsuit, dated Feb. 7,  in U.S. District Court, alleging widespread use of prayer on school property and during school events, in classrooms at all levels, at sporting events, at graduation ceremonies, during awards assemblies and at student government meetings. It also alleges that school officials openly proselytize students in Christianity.

The Bossier Parish School Board has since said they would change policies and train all administrators, teachers and coaches.

Johnson and Louisiana Attorney General Jeff Landry published “Louisiana Student Rights Review: Answers to Common Questions about Religious Freedom in Schools.” Prompted by the lawsuit against Bossier Parish schools, this document clarifies how students may and may not express their religious beliefs at school.

“Because religious speech must be treated just as all other speech, students are free to pray, discuss their faith, read the Bible or other religious texts, and invite others to participate in such activities,” the document reads. “To be protected by law, the religious expression must be student-led, student-initiated and voluntary.”

Landry and Johnson have touted the document as a resource for Louisiana students, parents, teachers, coaches, administrators and school board members to avoid campus controversy. The Student Rights Review outlines two basic ways in which religious expression could qualify for restriction at schools.