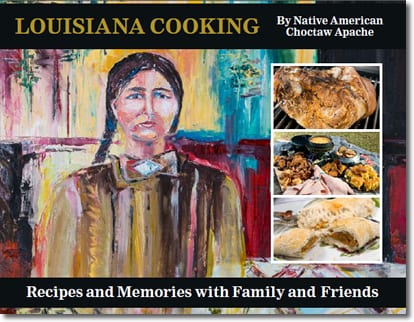 Dora Sepulvado, my late grandfather, was of average height, slim, with a wiry build. He ate sweet potatoes every day and lived to a healthy 94 years old. Around 3:30, each morning , he cooked several potatoes in the hot coals of his fireplace. He ate them throughout the day while driving his yellow school bus, farming or hunting in Ebarb, Louisiana.

Dora was called Papa by his 45 grandchildren which includes Chief Thomas Rivers of the Choctaw Apache Tribe of Ebarb. Our grandmother, was affectionately named, Goodmama. They were married 64 years, raising 7 daughters in the Sepulvado Loop of Ebarb. They farmed and raised sweet potatoes. They saved their crop during a drought by carrying buckets of water from a spring a half mile away and making a mud bed of the field.

A Recipe from Louisiana Cooking By Native American Choctaw-Apache

Rub potatoes with lard and wrap in foil. Bake on cookie sheet at 300 degrees for two hours. Potatoes are baked when they are soft.

Using your hands, mix flour, lard and salt together. Add enough water to form a ball. Divide dough into eight balls. Roll into 4-inch round pastries, one at a time. Fill bottom half with sweet potato mix and fold the top half over. Seal by pinching together with fingers. Bake at 350 degrees for 25 minutes or until golden brown.

Dorsey Ebarb Bronson is the author of Louisiana Cooking By Native American Choctaw-Apache. The book can be purchased online at www.choctawapachecookbook.com.