Jerome Durham, 31, faces a charge of armed robbery with use of a firearm.

The Bossier City Police Department responded to a report of an armed robbery Tuesday, June 3 at 6:30 a.m. that occurred at the Snappy Scrubs Car Wash in the 1900 block of Benton Road. 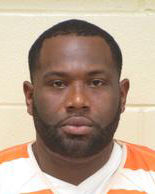 An employee told police he was preparing to open the business for the day when two suspects entered the office and robbed him at gunpoint. The suspects got an undisclosed amount of money from the business and fled the scene on foot. The employee was not injured. The suspects both had their faces covered and were wearing dark clothing.

The investigation into the robbery remains ongoing.

Anyone who has information about this case is asked to contact Bossier City Stoppers at (318) 424-4100.  They can also submit a web tip via the Bossier Crime Stoppers website bossiercrimestoppers.org. Persons who contact Crime Stoppers are reminded they may remain totally anonymous and could be eligible for a cash reward.