Bossier City police today arrested a teenager after he allegedly had possession of a firearm on a high school campus.

Detectives with the Violent Crimes Unit today arrested Bernard Epps Pogue, 18, of Bossier City on a charge of possession of a firearm on a school campus in connection with an incident that occurred earlier this week at Bossier High School in the 700 block of Bearkat Drive. 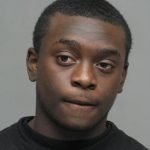 Police responded to the school Tuesday in reference to a fight and learned an individual, later identified as Pogue, was involved in a physical altercation at approximately 4:30 p.m. with a 14-year male student. Witnesses told police that after the incident Pogue, who is not a Bossier parish school student, went to his vehicle and displayed a handgun before driving away. Witnesses say they did not see Pogue point the weapon at anyone.

Police caught up with Pogue about an hour later at his residence and arrested him initially on a charge of simple battery pending further investigation into the allegation that Pogue had a weapon on campus. Pogue was booked into the Bossier City Jail and bonded out later that evening.

Detectives completed the subsequent investigation this morning and arrested Pogue again, this time on the weapon charge. Pogue was then booked into the Bossier City Jail.