Bossier City police have arrested a teenager for the aggravated rape of a girl. 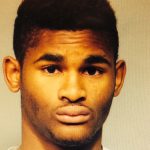 Joshua Jermaund Carter, 17, of Bossier City was arrested and booked into the Bossier City Jail Monday night following an investigation by detectives with the Juvenile Unit. Detectives began their investigation Monday afternoon after police were notified of allegations that Carter had engaged in sex acts with a female juvenile under the age of 13.