A Bossier teenager was arrested Friday afternoon and charged with terrorizing after making death threats to other students allegedly claiming he would blow up his school.

Damian Moon, 18, of the 2400 block of Churchill Drive in Bossier City and senior at Airline High School, admitted to Bossier detectives earlier today that has made statements that he was going to kill other students and blow up Airline High School.

Sheriff Whittington credits the swift action of the school resource officer in investigating the matter quickly and developing information that led to Moon’s arrest in order to keep students and the school safe. 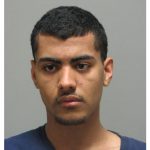 “Threats of this nature will be taken very seriously, and I encourage anyone who ever hears or knows of such threats to immediately contact authorities,” Sheriff Whittington said. “We will not tolerate anyone causing havoc, fear or terror in our schools, businesses, homes or anywhere.”

Detectives will continue their investigation in executing search warrants on Moon’s cell phone and computer. Moon was booked in the Bossier Maximum Security Facility Friday afternoon.

Terrorizing carries a fine of not more than $15,000 or imprisonment with or without hard labor for not more than 15 years, or both.