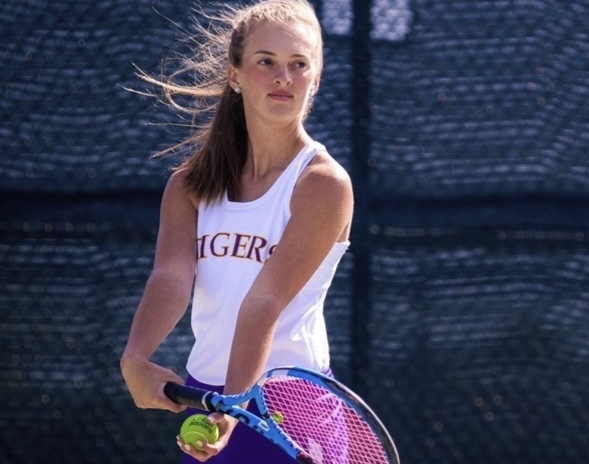 Raelee Craft and Zach Haley, who graduated from Bossier Parish high schools earlier this month, are among three students who have been awarded the inaugural Northwest Louisiana Community Tennis Association scholarships.

Craft, Haley and Zach Hicks will be recognized and honored at Pierremont Oaks Tennis Club on June 8 at 1 p.m.

A total of $2,000 in scholarships will be awarded on behalf of a beloved friend and mentor, Erroll Sims, who was very special to the tennis community and especially all junior players.

Sims became a certified official in early 2012 and was a regular at tennis events in Louisiana, Mississippi and Alabama. He always offered a friendly smile, a positive attitude and team spirit and was a great mentor and true friend to all that knew him. He is greatly missed.

Craft gained her love of tennis in the junior development program at Bossier Tennis Center.

She played on the tennis team at Benton and served as a volunteer for youth tennis programs, summer camps and Tennis Apprentice program.

“Tennis is a lifetime sport that promotes wellness as well as community,” she said. “I am so thankful for the people who have shared this game with me. It is a game I plan to play and promote for the rest of my life.”

Craft qualified for the Division II state tournament in April. She is currently playing in the Louisiana Family Medicine Clinic City Championships in mother-daughter doubles with her mother, Stacie, at the Bossier Tennis Center.

Craft plans to attend LSU and major in International Studies and Global Diplomacy. She plan to join the LSU Tennis Club and a USTA League.

Haley began playing tennis at 7 years old. He served as captain on the tennis team at Haughton, represented Louisiana in regional tournaments and competed in the LHSAA state tournament three years. The tournament was not held his sophomore year because of the coronavirus pandemic.

“Now, with hundreds of high school and USTA matches under my belt, I have realized that tennis has provided me so much joy and many life lessons for me,” Haley said.

Haley was the Region I-II runner-up in boys singles and advanced to the quarterfinals of the Division II state tournament in April.

He is also competing in the City Championships in men’s open singles and mother-son doubles with his mother, Sandra.

In the fall, Haley will attend Louisiana Tech. He plans to play on Tech’s club tennis team and in USTA leagues when he turns 18.

After trying out multiple sports as a child, Hicks knew tennis was his sport from the very first lesson.

“Tennis was like love at first sight,” said Hicks, who played  varsity tennis for years at Calvary Baptist. “It was very different from all the other sports.”

Hicks plans to play tennis at East Texas Baptist University where he will be studying Business Administration. Hicks also plans to make tennis his career and prepare to run his own tennis center.

Like the other two scholarship recipients, he is competing in the City Championships. He is playing in the men’s open singles and NTRP combo 7.0 doubles.

The Northwest Louisiana Community Tennis Association congratulates each of these students on their dedication to tennis and its impact on our community.

The NWLA CTA is a nonprofit with the mission to make a positive impact on the tennis community by providing support and resources in the development of programs, events, leagues

and facilities, promoting tennis as a healthy lifetime sport within North Louisiana to all ages and all skill levels. Learn more at http://www.playtennissb.com.