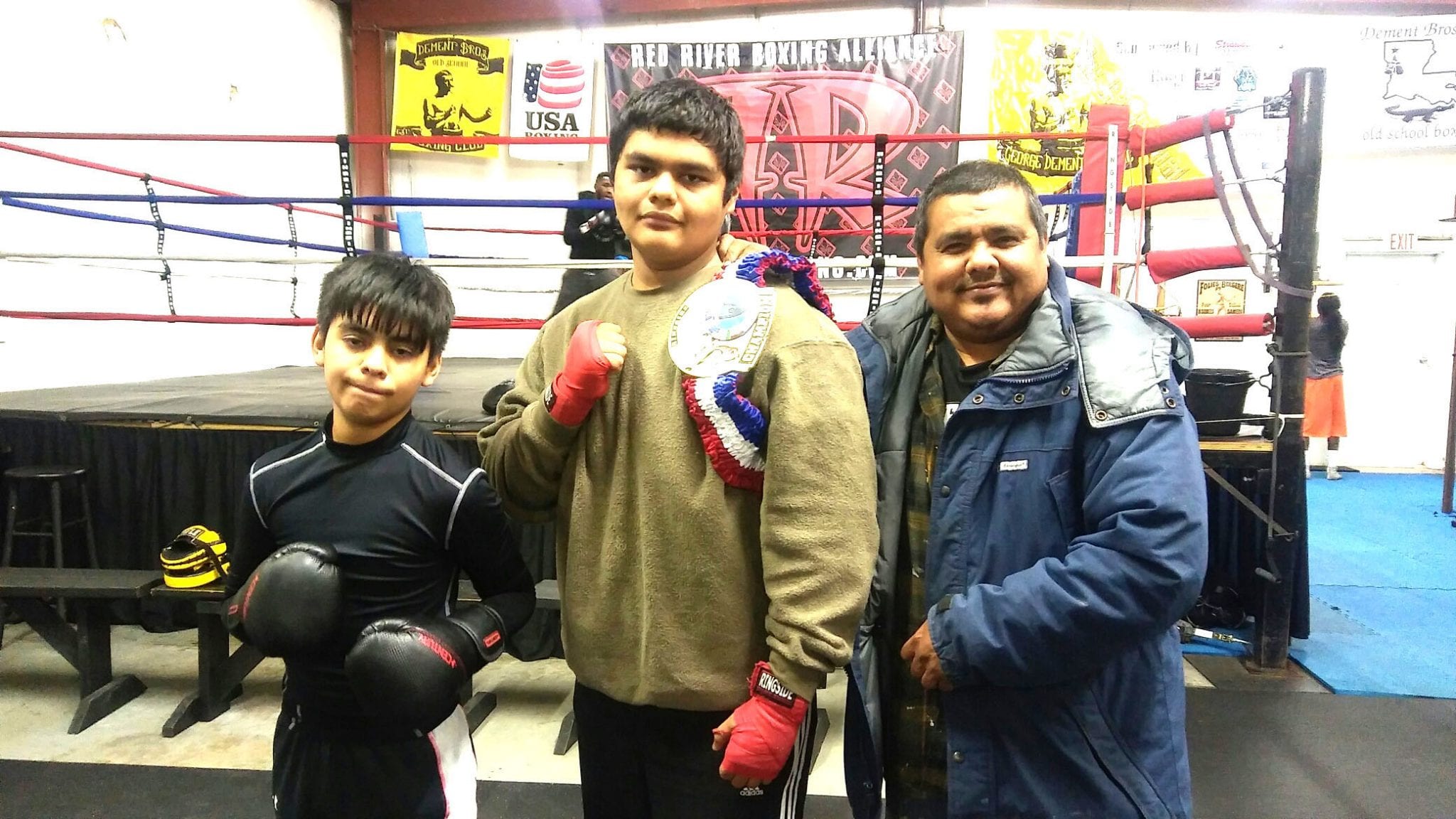 By Clint Land
Special To The Press-Tribune

“The Bus” from Bossier City made its third scheduled stop in Lafayette at the state Golden Gloves tournament earlier this month, knocking out his opponent some 2 minutes and 10 seconds into the first round of a three-round heavyweight fight.

The Bus, or Gus the Bus as he is known at Dement Brothers Old School Boxing Gym in south Bossier, is actually Agustin Alvarado Garcia, a 16-year old junior at Parkway.

Garcia, who also plays football for the Panthers, said he likes the nickname his friends at school and coaches both on the football field and at the boxing gym hung on him more than a year ago.

“Well it rhymes and I think (because I can punch hard) my hands are like the bus,” Garcia said. “Coach (Neil) May (at Parkway) has told the guys on the football team, ‘don’t mess with Gus, he’ll bring the bus.’ ”

“He has improved tremendously in the past few months,” said head boxing coach Jake Dement. “Everybody improves at a different pace and Gus has really started to come into his own (of late).”

Recent improvements may be the understatement of the year. The championship fight was Garcia’s third actual official amateur contest. But it will be one he remembers for a long time.

“I weighed in at 237 pounds at 4 p.m. then we had to wait until 6 for the fight to start. Coach (Dement) and I prayed together, then we went to the ring,” the champ recalled of fight day.

“The ref told us to touch gloves then I heard that bell ring, and (my opponent) was jabbing me. He hit me a few times, but I could hear my coaches yelling to throw the 6-7 (liver punch combos with both hands).”

Garcia connected with the 6-7 combo of body shots then managed to hit his heavyweight competitor with three consecutive over hand rights.
“I saw that stunned him a little bit. He was wobbling some after I hit him,” Garcia said.

The referee saw the same reaction and applied a standing eight-count. While the eight-count slowed the action Garcia said he tried to focus on what his coaches had told him before the fight.

Dement is Garcia’s head coach and trainer and was accompanied to the fight by trainer Austin Askew and his son Carter, another Dement Brother’s boxer that attends Benton High School.

“They told me to stay relaxed and work on the things that I practice at the gym every day,” Garcia said. “Don’t get wild in the ring, just stay relaxed.”
The fight was re-started after the mandatory standing eight count and the two fighters met again in the middle of the ring.

“Once we started again I just hit him with the same three over hand rights. The ref looked at him again and just stopped it,” Garcia said.

A technical knockout was recorded 2:10 into the first round and Bossier City had its Louisiana state heavyweight champion for the novice division, ages 15 and 16.

“This novice division is a big thing for the kids,” Dement said. “And Gus stopped his opponent with devastating power.”

The state-sanctioned Golden Gloves event was in front of an estimated crowd of about 200 fight fans. However, none of Gus’s family was able to attend due to work scheduling conflicts.

By the end of the fight though, The Bus had not only won his division title for his age and weight but also won over the rowdy south Louisiana crowd.
“The fans were screaming for me even though I didn’t know anybody there really,” Garcia said.

And there’s a lot to cheer for when supporting Garcia.

Growing up in Bossier with his mom Norma Garcia and dad Pascal Alvorado Sauciedo along with three brothers and three sisters, boxing has been a life-changing sport.

“I’ve been boxing for about three years now, my dad boxed (starting in his home town of Zacatecas City, Mexico, in the 1980s) and when he saw the “boxing” sign in front of the gym one day he brought me in,” he said.

Since then, Garcia has lost more than 100 pounds while skipping rope, shadow boxing and hitting the heavy bags at Dement’s gym on Highway 71.

“I think the boxing has given him better discipline now. He is thinking about what he is doing (both in the ring and outside of the ring),” Sauciedo said. “It’s too far into the future for him to think about (professional boxing) but I know for now he has maybe a hundred fans and family members who love to watch him fight.”

But the boxing bug didn’t catch on with Garcia right away.

“Oh it took time. I had to motivate myself. But once I started really hitting the heavy bag I knew I liked it,” he said. “Boxing is good exercise which I like, but it was the good coaching and the good friends (he found at Dement Brothers) that kept me coming back.”

First was Dement. “Jake taught me with the mitts (gloves a coach wears to simulate a boxing match in the ring). He is a good coach. If it wasn’t for him I wouldn’t be here. I believe that,” Garcia said. “But my family too. Just the way we live we are such a close-knit family.”

Dement liked his fighter’s reference to family when talking about his gym.
“We like to promote the family atmosphere at the gym,” he said. “We all support one another and Gus is one of those kids who has really embraced it.”

Garcia wasn’t the only local fighter to make his mark in Lafayette.

Carter Askew (one of two teenage fighters from Bossier to compete) was credited with a “walk-over” win in his scheduled fight.

Adams will advance to the next round of Golden Gloves in a few months and be allowed to continue fighting on his quest to become a national Golden Gloves champion.