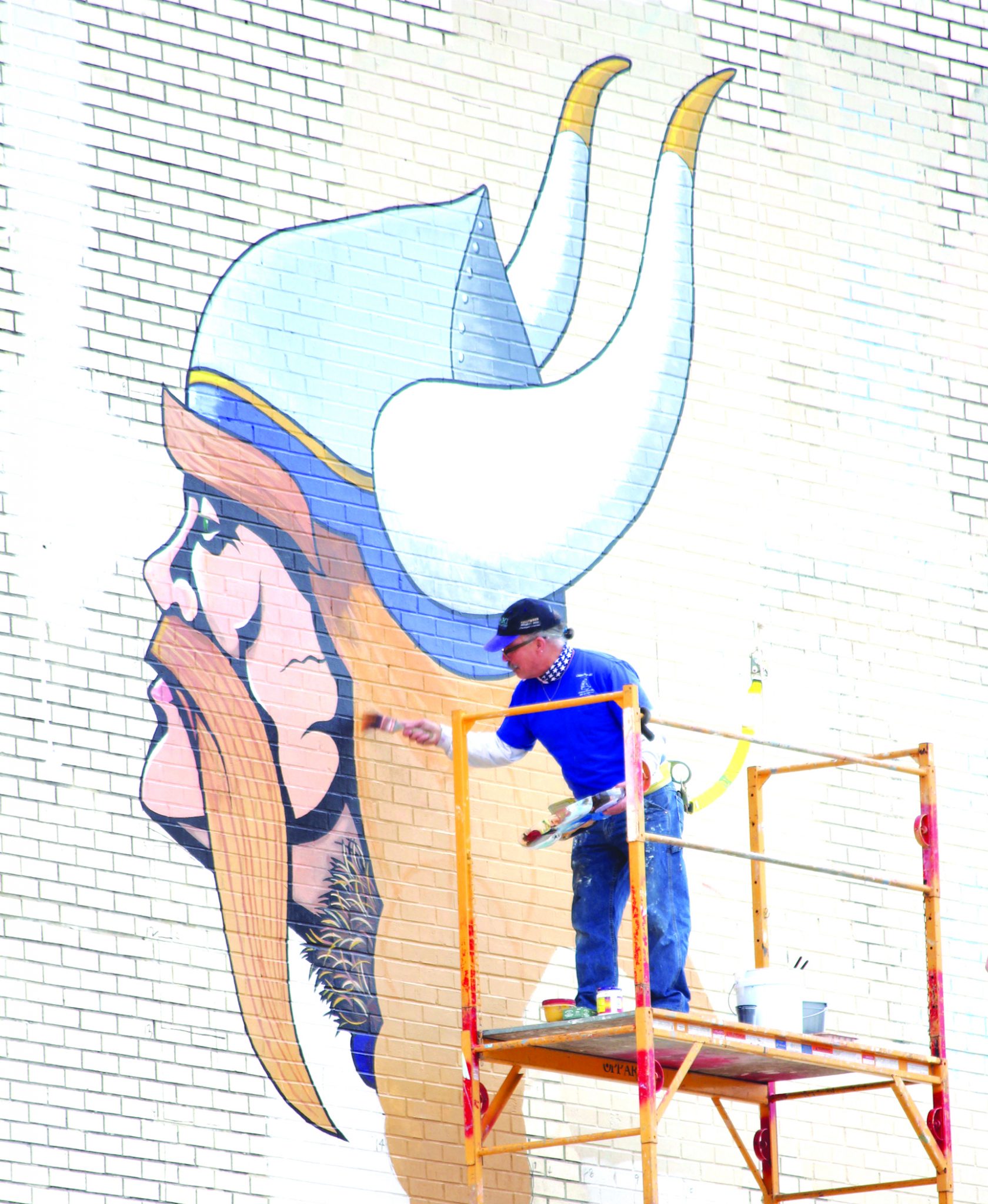 The new face of Airline High School is taking shape, one brick at a time.

Measuring at 17 feet tall and 48 feet wide, the mural brings a fresh face amidst the school’s golden year celebration, signifying that the best is yet to come for the Vikings. Principal Jason Rowland said the mural is only the start of many physical changes coming to Airline over the next few years.

“We are commemorating the 50 years of excellence at Airline High School,” he said. “We have been doing things all year long, reflective of that celebration, and wanted to do something that would kick off the reconstruction as the new face, new brand and new look of Airline.”

The idea for a new mural has been tossed around for years, Rowland said, but the project just happened to fall into place at the right time. Chris Opp of Chris Opp Art & Construction, LLC in Bossier City is hand painting the Viking’s mural, spending anywhere from three to eight hours a day on his latest masterpiece.

The original mural, which featured a full figured Viking, was painted in 1993. Opp, a Bossier City resident, said he always had a recurring thought when passing by Airline High School – “I wish I could change that.”

Now that he has been given the chance, Opp is taking it as an opportunity to bring color to the community in a fresh, new design.

“The Viking head is used throughout the school. I just took that idea and made it better,” Opp said. “As an artist, I have artistic variance in my design to make it better on the wall than it is on paper.”

Rowland said Opp “hit a homerun” with the design.

“Any time you provide a ‘wow’ factor change, it puts a little more kick in everybody’s step,” Rowland said. “The essence of change will give people something to talk about and I think it will generate a lot of emotions.”

Opp agreed, adding that “a lot of changes are coming” to the campus and “this is only the start of those projects.”

According to the Bossier Schools website, Airline High School, “the largest high school in Bossier Parish,” is nearing capacity and will be getting a much needed facelift to meet the needs of the growing student population.

“…the construction project at Airline calls for a multi-phase approach, it being the largest in scale,” the website states. “…the two existing classroom wings will be replaced by two new three-story wings. Major renovations will also be made in the media center and administrative area, a new entry lobby will be added to the front of the school, a larger outdoor dining pavilion constructed and restroom improvements made.”

An estimated completion date for the school renovations is the winter of 2015-2016. Opp, however, plans to have the new Viking mural completed by Christmas, weather conditions pending.

“I’m very fast and good at what I do,” he said with a smile.

Rowland said the wall with Opp’s mural will not be affected by the impending school construction.

“Look at that Viking,” Rowland said proudly from the school’s parking lot. “How about that.”

This is Opp’s 16th mural to be completed in 2013. Other local projects include the “Bubbles” mural behind the Bossier Arts Council, The Hub: Urban Ministries, the C & C Lighting mural on Line Avenue in Shreveport as well as nine interior and exterior murals at the Margaritaville Resort Casino.

Nationally, Opp has painted a mural at the Westside Lowes in Albuquerque, New Mexico that is, to this day, still “the largest mural” in town.

“My goal as an artist is to bring color into the world and local communities, and to make walls come to life,” Opp said.