From the moment the gate opens, Marshall “Tucker” Nesbit is holding on for dear life as the thousand pound animal below him thrashes around the arena.

The goal is to stay on for eight seconds. All he can do is keep his back straight, legs tight and his free hand up because it can’t touch the bull.

His mom, Carla, on the other hand, is in the audience cheering and praying for a safe ride.

Marshall, 13 of Haughton, lives for the adrenaline rush in the arena. He became addicted to the sport of bull riding after competing in his first rodeo at age 11, which he won.

Two years later, Nesbit is making a name for himself on the world circuit, recently placing eighth at the Chris Shivers Miniature Bull Riders World Finals.

“In bull riding, you don’t always win, but when you do it’s a whole lot of fun,” he said.

Chris and Carla Nesbit have always been supportive parents, but bull riding was a first for them. It seems like it was meant to be, though. Carla jokes that Marshall was born wearing chaps and boots.

“I like adventure and I’m a thrill seeker,” Marshall said. “I tried football and baseball, but it was boring.” 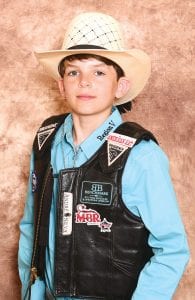 The Nesbits live life on the road, traveling out of state for practice and rodeos. Marshall works with a coach in Canton, TX and spends Tuesday nights in Jasper, TX with a bull riding and devotional group. They spend three weekends a month traveling to rodeos, riding in places like Texas, Iowa, south Louisiana, Mississippi and Nevada.

Marshall’s climb to the number eight spot hasn’t come easy or without injury. There have been many bumps and bruises along the way. His worst injury came when a bull stepped on him. He was airlifted to a hospital, where doctors found his liver had been lacerated.

Ten days into recovery, Marshall asked if he could ride again. The Nesbits prayed about it, ultimately deciding to let him go at it again.

There was tough competition at the Chris Shivers Miniature Bull Riders World Finals in Las Vegas, NV. Not just for the riders, but the bulls were giving competitors a rough time.

Marshall, who goes by the name Tucker in the arena, remembers going head-to-head with a bull named Black Bart twice at the competition. No body had been able to cover Black Bart that week, meaning riders had not stayed on the full eight seconds during rides.

Even Tucker had been bucked off once before.

“He was strong, really heavy, and kind of a spinner,” he said, describing the bull.

But his second ride was different. Tucker lasted the full eight seconds to cover Black Bart, earning a score of 82.5.

“I took a knee and prayed, giving the glory to God,” he said. “I was proud and excited.”

His mom, Carla, watched it all happen from the stands. They relive that ride while watching a cell phone video, feeling the excitement all over again as it happens on the screen.

“I just hope he follows his dreams,” Carla said. “I hope he keeps training and learns the proper techniques to keep his body safe. We’ll keep doing it at long as he is doing it safely.”

Marshall, who is an eight grader at Haughton Middle School, said he’s focused and ready for the next ride, whenever and wherever that may be.