The dress rehearsals are over. Friday night it counts.

The 2015 high school football season is about to begin in Bossier Parish and across Louisiana. 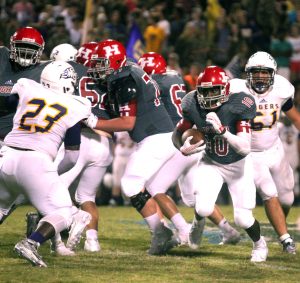 The players have been getting ready for Friday night since the end of last season.

There have been hours and hours of offseason workouts, 10 days of practice in the spring followed by a scrimmage, 7-on-7 games during the summer, a couple of weeks of practice leading up to the fall scrimmage and, of course, last week’s jamboree.

If the Bossier Lions Club Jamboree is any indication, then interest remains very high in high school football in the parish. Airline Stadium was almost filled to capacity. Student sections were out in full force.

Of course, football season isn’t just about the players and coaches. Marching bands,  dance lines and cheerleading squads have been preparing just as hard.

Pep squads, proud parents, grandparents and other relatives, students and just general fans add up to hundreds involved in the games and the activities that surround them.

Coaches like saying they don’t want their players looking past the next game on the schedule. One of the familiar cliches is “we take ‘em one game at a time.”

That’s not a problem with the season opener.

“It’s your last year, your last first game,” said Airline senior wide receiver Cameron Howell, a first-team All-Parish selection last season. “It’s just something that you have to live in the moment — just have to do your best and leave it all out on the field.”

The Vikings have had a chance to face other teams in their scrimmage and the jamboree, but Friday night will be different.

“You work all these three weeks going against each other and you finally get to play somebody else, and then it’s you’re last year,” he said. “I don’t down how to explain it.”

This will also be Airline running back/receiver Darian Germany’s last season opener as a high school player. Germany has been on the varsity since his freshman year and a starter for three years.

He said he doesn’t really get nervous or have the jitters before games anymore. He’s just ready for the season to begin.

“‘I’m really confident in our team and what we’ve been doing over the summer, and I’m real happy where we are,” he said. “I just feel like we’ll get better and better each team we play.”

Plain Dealing first-year coach James Thurman has been involved in opening nights as both a player at Haughton and as a coach at several area schools.

He wants his players to soak up the atmosphere, especially the seniors. For most of them, this will be the final season of their playing careers.

“You never get another chance to play your last first game of the season,” Thurman said.  “So I tell these seniors, at Haughton for some of you that’s going to be your last first game. You really need to take it in and take it for what it is. It’s an opportunity to get to do something not a lot of people get to do or are not willing to do. It’s a lot of pride for your school, yourself and friends. It’s really something special.

When Plain Dealing played in the jamboree last Friday, Thurman found himself reminiscing about being in the locker room at Airline Stadium when he played at Haughton. 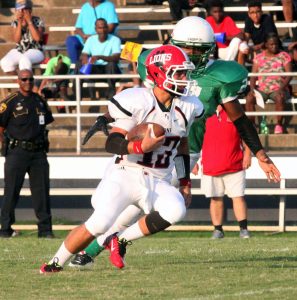 “It looked a lot different when I played, but I’ve been there,” he said. “You don’t lose that kind of thing, the sights and the things you see and remember. They always stay with you.

“You try to tell these kids these are memories you’re going to have the rest of your life and you need to kind of slow down and stop letting the world today kind of be in your mind all the time and focus on the things that are important like football, like school, like friendships, things like that. One day those things aren’t going to be there anymore.”