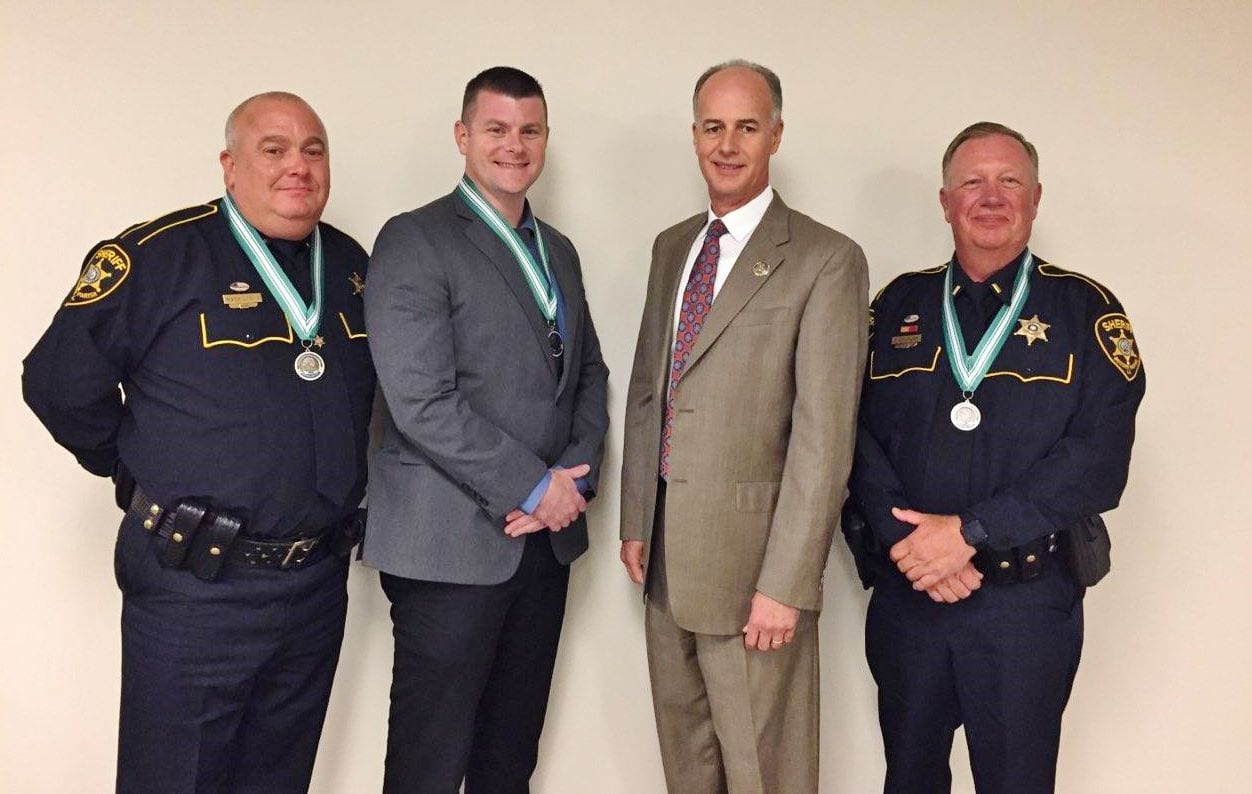 Three Bossier Sheriff’s Office deputies recently joined 39 other law enforcement leaders from Louisiana and other states as they graduated from the highly-intense Leadership Education Program at the National Command & Staff College.

Lieutenants Justin Banet, Mark Lyons, and Dan Wolff of the Bossier Sheriff’s Office completed the eight-week training program along with law enforcement leaders from various sheriffs’ offices and police departments and graduated during a ceremony in Lulig, La. on July 17.

The National Command and Staff College promotes leadership skills to help build and promote safety and trust in the community, enhance officer safety and wellness, and reducing the agency’s and officer’s liability and risks. During the intense program taught at a graduate level, students listened to lectures and participated in classroom discussions, read a number of books, wrote essays, and conducted case studies and a group project. They also learned ways to act ahead of change to create an optimistic future for law enforcement and the communities they serve.

The graduates of Session 009 were from 12 different law enforcement agencies from Louisiana, Alabama, Mississippi, and Texas. The officers were then broken up into six different teams.

“It was an intense leadership school, and I learned a lot about leadership theory and style,” said Lt. Banet, supervisor of the Detectives Office at the Bossier Sheriff’s Office and member of the class’ ‘Team Sharks’. “I learned much about being a leader at work, as well as being a leader at home…basically how to be a good leader in life.”

Fellow Bossier Sheriff’s Office graduate, Lt. Lyons, of ‘Team Hawks’, agreed.
“It was a lot more involved than I first thought,” Lt. Lyons, training coordinator for the Bossier Correctional Facilities, said. “We had to do a series of online courses even before attending class. I learned a lot, and I’m grateful for the experience.”

Lt. Wolff served 20 years in the U.S. Air Force and attended numerous leadership schools in his military career. He said this leadership course, which combined online and in-person training, was very fulfilling.

“This was one of the most challenging leadership courses I have even been through,” said Lt. Wolff, part of “Team Lions.” As the Patrol supervisor of the “SEE” (Simple, Efficient, Effective) night shift, he sees his leadership role as one of inspiring other officers and putting them on their own succession plan.

“On the night shift, the majority of the deputies are rookies. This course gave me more tools I need to help mold and develop these officers to become leaders themselves.”
Bossier Sheriff Julian Whittington recognizes the importance of continued training and education.

“Ensuring we have excellent leaders serving at the Bossier Sheriff’s Office will allow us to ensure we continue to serve Bossier Parish with the utmost of professionalism,” said Sheriff Whittington.

Lt. Wolff’s team also was awarded the Top Research Award for the presentation of the Capstone Project entitled “Officer Wellness…the Silent Killer,” which focused on mental, physical and family issues.

Lt. Wolff wanted to add one more thing about how excited he, Lt. Lyons and Lt. Banet were during graduation. “To have our Sheriff and Bossier Parish “First Lady” Melissa, travel five hours to our graduation meant a lot to all of us. He exemplifies leadership.”