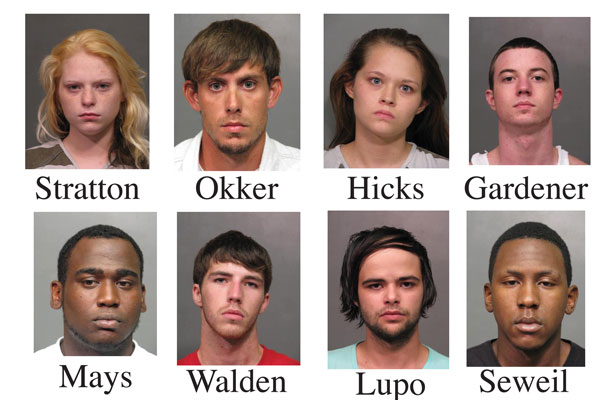 Bossier City police arrested eight people and recovered narcotics, firearms and cash over the weekend after receiving an anonymous tip about drug activity at a room in a local hotel.

Police responded to the Crossland Hotel in the 3000 block of East Texas Street this past Saturday around 4:30 a.m. after receiving information that the individuals inside a room were engaged in illegal drug activity. Upon arriving at the room, officers made contact with several people inside and immediately detected a strong odor consistent with that of burnt marijuana. A subsequent investigation resulted in police recovering 6.2 grams of cocaine, 15.2 grams of marijuana, 28 packages of synthetic marijuana, 44 Xanex tablets, 1.8 grams of methamphetamine and 5 Adderall tablets, as well as three firearms. Officers also seized nearly $3,000 in cash along with various items of drug paraphernalia.

All of the suspects were booked into the Bossier City Jail and later transferred to the Bossier Parish Maximum Security Facility.