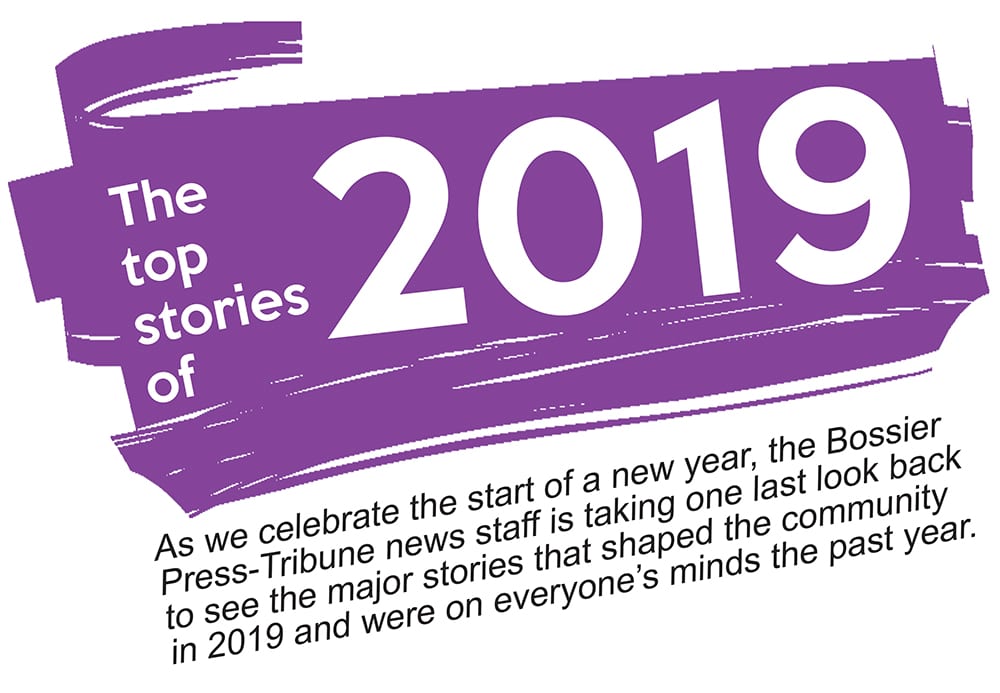 President Donald Trump fired back at liberals following through with impeachment proceedings during a stop in Bossier City Nov. 14.

Trump waxed philosophical about the House Democrat-led impeachment inquiries, saying Democrats are “deranged” and the hearings are a “witch hunt.”

“Impeachment to me is a dirty word, it’s been very unfair, very hard on my family,” Trump said. “They don’t know what to impeach me for…According to the poll numbers, Americans aren’t buying it.”

“Democrats are ripping our country apart. They’re trying to overthrow American democracy and erase the votes of tens of millions of Americans,” Trump said. “The Democrats are trying to stop me because I’m fighting for you.”

Trump claimed the radical left and their media partners are pushing the “deranged impeachment witch hunt” even though he did nothing wrong.

“Washington has declared war on your values… Under Republican leadership, our nation’s economy is booming, wages are rising, confidence is soaring, liberty is thriving, and America is stronger than ever before,” Trump added.

The stop was part of a rally to encourage voters to cast their ballots for Republican gubernatorial candidate Eddie Rispone during a rally at the CenturyLink Center in Bossier City. The effort was to unseat Democratic Gov. John Bel Edwards.

Two proposed tax millages that would have gone towards a pay raise for teachers and created a technology funding source for schools were soundly defeated by voters in May.

A 22.94 mills property tax for boosting teacher and support staff salaries was defeated 74 percent to 26 percent.

A 3.22 mills ballot measure that would have created a funding source for technology was defeated 75 percent to 25 percent.

The millages were a highly contentious item in the community with statistics showing the millages would have caused property taxes to rise by nearly 40 percent.

Several business owners came out against the millages, with some even creating or sponsoring PACs to combat the millages, feeling the burden would rest mainly on their shoulders.

Stats from the Bossier Parish Tax Assessor’s office supported this notion, showing businesses would bear 70 percent of the property taxes. An additional cost of $17.5 million, according to 2019 estimates.

The Bossier Parish School Board ended up approving a modest raise for teachers and certified employees in mid-July.

This increase will replace the system’s perfect attendance stipend.

“This is $1,000 from the state and $500 for support personnel. This is taking the $1,200 and the $700 stipend, and no longer having to worry about it coming up every year. This is now going to be part of the salary schedule,” said School Board President Shane Cheatham.

The board began reviewing its budget and discussing how to increase teacher and support employee salaries in the wake of the failure of a property tax millage for pay increases in May.

“We spent several weeks going over our budget pulling it apart. I think we have done a really good job of explaining our budget to our community by going line-by-line,” Cheatham said. “We cut $2.2 million out of this year’s budget so we could come up with a $300 raise for teachers and a $50 raise for support personnel.”

The board’s finance committee held a series of budget review meetings prior to the board’s decision.

These meetings were open to the public and streamed live in order to provide board members, business owners and the community a view of the school board’s revenue and expenses. Multiple school board members requested these meetings in order to get an in-depth review of the school board’s budget following the defeat of two proposed tax millages in May that would have gone toward a pay raise for the teachers and a technology funding source.

“I still say we’re not finished with a $300 dollar raise at a $2.2 million dollar cost. We still need to figure out how to work with our business community and our people in the community to find a way to get a real raise for our teachers and our employees,” Cheatham added.

In early June, the board voted to end its perfect attendance stipend for teachers and support staff, citing higher than expected costs and its unpopularity.

Former Bossier Parish Schools Superintendent Scott Smith retired in early 2019 and eventually pled guilty in late July to four charges in a federal drug case, with Mitch Downey, his assistant superintendent, being chosen to replace him.

Smith pleaded guilty to four counts of simple possession of controlled substance and sentenced to 1 year probation and a $100,000 fine to be paid within 7 days.

According to the guilty plea, law enforcement agents intercepted a DHL package containing Diazepam, also known as Valium, addressed to a Bossier City residence on Jan. 31, 2019.  After the Diazepam tested positive, the agents conducted a controlled delivery of the package, which originated in India and contained a forged prescription.

Smith was confronted by law enforcement agents after he picked up the package and placed it in his vehicle, and agreed to a search of his vehicle, resulting in the Diazepam package being recovered.  In an interview later that evening, Smith admitted to purchasing controlled substances illegally online without a valid prescription for six years, spending more than $10,000 on controlled substances during this time.

Smith retired in February after news broke in late January that he was under federal investigation.

Downey was chosen as superintendent in April from a pool of six applicants.

“I am humbled. I appreciate your support, I appreciate the people who work for Bossier Parish School System and their passion. I appreciate the board for this opportunity,” Downey said at the time. “This is not about me. This is about us and the opportunities we have moving forward. There’s nothing great about Mitch Downey, but when we work together, we can accomplish great things.”

Americans United for Separation of Church and State and the Bossier Parish School Board called its settlement in late January regarding religion in schools a win for students and their families.

The settlement, which includes policy changes approved by the school board last week, will end a more than year-long legal dispute over the promotion of Christianity in Bossier public schools.

“This historic settlement is a victory for all Bossier families, and will ensure that children feel welcome and included in their own schools, regardless of what religion they do or don’t practice at home,” said Rachel Laser, president and CEO of Americans United. “Bossier Parish allowed religious coercion to proliferate throughout their schools – that system will no longer exist and rigorous protections that are enforceable by law have been put in place for all students. We are thrilled that Bossier Parish Schools are now fulfilling the promise of religious freedom for all of their students.”

“The settlement allows for the closure of this case without the loss of any student rights, which is of utmost importance to the Board,” said Bossier Schools Superintendent Scott Smith. “We are pleased to be able to resolve this matter without impinging upon our students’ rights, which we see as a victory for all of Bossier Parish.”

The Bossier Parish School Board and Americans United for the Separation of Church and State submitted a Consent Order to the Court for its consideration, following negotiations for a potential resolution of the case. Part of that Order calls for a slight revision of the Board’s Religious Expression Policy, a copy of which was attached to the filing with the Court.

“Since the beginning, it has been the Bossier Parish School Board’s resolve to stand united in an effort to preserve every student’s freedom of religious expression. This resolution does exactly that,” the statement said.

On Jan. 14, 2019, the Bossier Parish School Board approved a revised religious expression policy and agreed to a settlement with AU, which was filed with the federal district court

“As a result of our lawsuit, there is now a substantial mechanism in place for the next 12 years to oversee and ensure that Bossier Parish Schools comply with the law and protect the religious-freedom rights of all students and their families,” said Richard B. Katskee, legal director of Americans United. “Nothing like this has ever been done before to safeguard religious freedom in public schools. Americans United is committed to a sustained presence in Bossier to ensure that the Constitution is being upheld.”

All five of the alcohol propositions in the Town of Haughton passed, garnering above 65% of the yes votes. The vote allows additional alcohol sales in stores, with the goal of recruiting major grocery stores and restaurants.