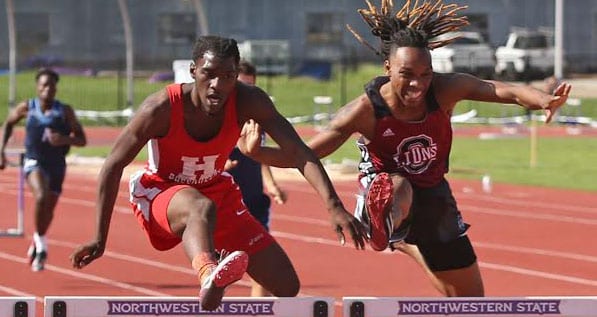 It was quite a day for Haughton senior Antonio Woodfork at the LHSAA Outdoor Track and Field Championships at LSU.

Woodfork was named Outstanding Performer in the Class 5A boys meet Saturday after winning the 110-meter hurdles and the high jump and finishing second in the 300 hurdles.

Woodfork was the only individual champion from a Bossier Parish school.

That victory made up for some disappointment for Lister. He had the fastest qualifying time in the 100 but was disqualified after a false start.

Woodfork and the relay team led the Bucs to a tie for third with John Curtis in the team standings with 38 points. Archbishop Rummel was second with 42. Perennial champion Baton Rouge Catholic won with 96.

Parkway senior Sara Funderburk completed her outstanding track career with a runner-up finish in the 5A girls 1,600 and a third-place finish in the 3,200.

In the last two years, Funderburk has a first, two seconds and a third at the state meet. She also won the 2014 5A cross country title. She is headed to LSU to play soccer and run track.

In her first year competing in track and field, Haughton junior Savannah O’Neal finished runner-up in the 5A girls javelin.

Airline senior Xavier Johnson also got on the medal stand with a third-place finish in the 110 hurdles.

Woodfork and Rummel’s Kristian Fulton came into the 110 hurdles tied for the best qualifying time and the race played out that way.

Woodfork won the high jump with a personal-best 6 feet, 6 inches. He cleared that height on his second attempt. West Monroe’s Austin Walker also cleared 6-6, but he didn’t do it until his third attempt. That made Woodfork the winner after both failed at all three attempts at 6-8.

Haughton breezed to victory in the 4X100 in 41.44, .39 seconds ahead of West Monroe. The victory came not long after Lister was disqualified in the 100. Lister was undefeated in the event this year. His qualifying time of 10.51 was well under the winning time of 10.67 posted by Sethan Hollier of Catholic.

O’Neal threw a personal best 123-0 in the javelin on her sixth and final attempt. That moved her up from third to second. She finished only 11 inches behind Alexandria Senior High’s Sabrina Thiels.

Benton’s KeKe West and Taylor Davis almost made it to the medal stand.

West finished fourth in the 4A girls triple jump with leap of 35-11.25. North DeSoto’s Jessica Trammel just beat West out for the third-place spot with a 36-1.

Davis, a freshman, finished fifth in the 4A girls high jump with a leap of 5-0.

Haughton’s Inez Green was fifth in 5A girls shot put with a toss of 37-1.

Benton’s Ryan Campbell was seventh in the 4A boys 800. Benton’s Mallorie Gill and Brenna Bundy posted eighth-place finishes in the 4A girls javelin and pole vault, respectively.