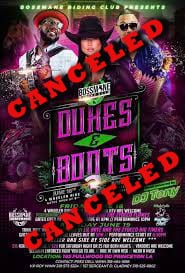 In light of recent events at previous regional trail rides, the Bossier Parish Police Jury, at the request of the Bossier Parish Sheriff’s Office, issued an injunction to the cancellation of the “Dukes and Boots” trail ride presented by Bossmane Riding Club on June 18 – 19 in Princeton, that was scheduled for this weekend, despite efforts by organizers who continued to promote and encourage attendance, even though the event is canceled.

The road to where the event was going to be held is closed, except for locals. Patrol deputies with the Bossier Sheriff’s Office will enforce the injunction, and anyone attempting to attend this canceled event on Fullwood Road in Princeton will be turned around. Those who do not comply will be arrested.

“Public safety is my number one priority as Sheriff of Bossier Parish,” Bossier Sheriff Julian Whittington said.  “I appreciate everyone’s compliance as we keep residents safe.”

According to the injunction, the Bossier Parish Police Jury members voted unanimously Wednesday to prevent the weekend event advertised as a Friday 4-wheeler ride and a Saturday trail ride, with musical performances scheduled later both evenings.

With the vote, the police jury authorized the parish attorney to file for an immediate injunction in 26th Judicial District Court against the promoter and the landowner.

Attempts by the Bossier Sheriff’s Office to contact the promoters of the event to inform them that it is canceled have been unsuccessful.