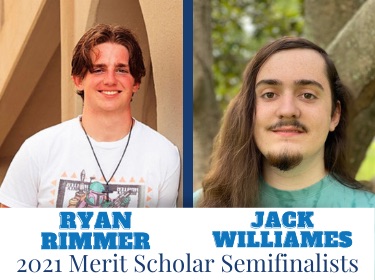 Two Bossier Parish high school seniors have been named Semifinalists in the 67th Annual National Merit Scholarship Program. Ryan Rimmer and Jack Williames were singled out for their exceptional academic ability and potential for success in rigorous college studies.

Rimmer is a student at Haughton High School, where he is actively involved. He is a member of the Varsity Basketball team, Student Council Senior Class President, Vice President of the National Honor Society, Random Acts of Kindness Club Reporter, Crew Leader and a member of Beta Club, Red Jackets and Fellowship of Christian Athletes.

Williames transferred to Airline High School at the beginning of his senior year from Eagle River, Alaska. He is an avid piano player, programming hobbyist and enjoys playing Dungeons and Dragons. Williames also attends Bossier Parish School for Technology and Innovative Learning and hopes to pursue a career as a computer scientist.

Approximately 95-percent of the Semifinalists are expected to attain Finalist standing and about half of the Finalists win a National Merit Scholarship, earning the Merit Scholar title.

Being chosen as a Semifinalist is a feat in itself. Each year, more than 1.5 million juniors enter the National Merit Scholarship Program by taking the Preliminary SAT/National Merit Scholarship Qualifying Test (PSAT/NMSQT), which serves as an initial screening of program entrants. The nationwide pool of Semifinalists, representing less than one-percent of all U.S. high school seniors, includes the highest scoring entrants in each state.