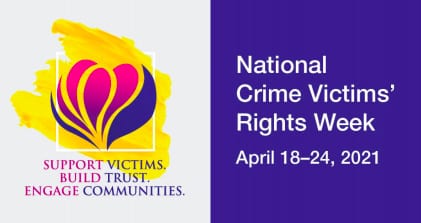 “Crime has affected many of us, whether individually or through a family member, friend, or neighbor,” Van Hook stated. “Our office remains steadfast in our commitment to seek justice for victims of crime by prosecuting those who have victimized others and to provide support for crime victims throughout the legal process. This week is a great reminder to each of us to celebrate, honor and support those who have suffered as victims of crime.”

National Crime Victims’ Rights Week is a time to renew our commitment to serving victims of crime, acknowledge achievements made in the victim services field, and remember crime victims and survivors. During the week, victim advocacy organizations, community groups and state, local and tribal agencies traditionally host rallies, candlelight vigils, and other events to raise awareness of victims’ rights and services. This year, many communities are organizing virtual gatherings and online public awareness campaigns.

Some 3.3 million Americans age 12 and older were victims of violent crime in 2018, according to the National Crime Victimization Survey. The Office for Victims of Crime (OVC), part of the Justice Department’s Office of Justice Programs, supports more than 7,000 local victim assistance programs and victim compensation programs in every state and U.S. territory.

Funds for these programs come from the Crime Victims Fund, which is made up of federal criminal fines, penalties and bond forfeitures.

Ronald Reagan proclaimed the first Victims’ Rights Week in 1981, putting crime victims’ rights, needs, and concerns in a prominent spot on the American agenda. He also established the President’s Task Force on Victims of Crime, which laid the groundwork for a national network of services and legal safeguards for crime victims.

Each year, the National Crime Victims’ Service Awards Ceremony is held to honor individuals, teams, and organizations for their vision, action, and leadership on behalf of crime victims. This year’s ceremony will be held virtually on Friday, April 23, 2021 from 3:00-4:30 p.m. EST. Visit https://ovc.ojp.gov/news/announcement/its-national-crimevictims-rights-week to learn more about this year’s ceremony and other activities offered this week.