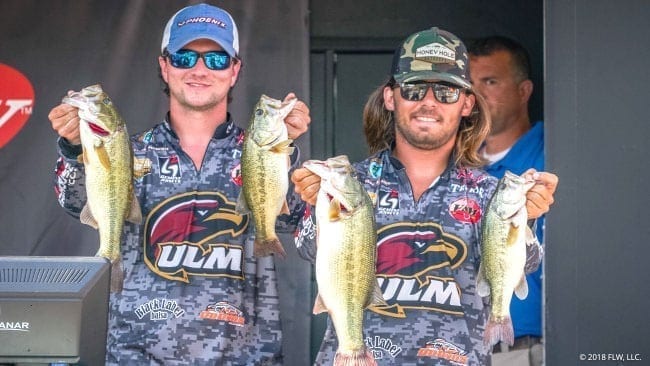 The University of Louisiana-Monroe duo of Thomas Soileau and Hunter Freeman, both of Monroe, brought a five-bass limit to the stage Thursday weighing 12 pounds, 4 ounces, to extend their lead to 1-pound, 1-ounce, with one day left to fish at the 2018 YETI FLW College Fishing National Championship on the Red River presented by Lowrance C-MAP Genesis.

The field is now cut to the just the final 10 teams at the four-day event that featured 168 of the top college bass fishing teams from across the nation competing in the internationally-televised tournament for the top prize of $30,000, including a new Ranger Z175 boat with a 90-horsepower Evinrude or Mercury outboard.

The National Champions will be crowned Friday, based on the cumulative three-day weight total. The winning team will then advance to compete in a one-day fish-off on Saturday against each other on an undisclosed local fishery, which will be revealed following Friday’s Championship weigh-in.

The two anglers will weigh in Saturday at 3:25 p.m. prior to the final weigh in of the T-H Marine FLW Bass Fishing League (BFL) All-American championship at Cross Lake. The winner will receive entry into the 2018 Forrest Wood Cup, the world championship of bass fishing, held August 10-12 on Lake Ouachita in Hot Springs, Arkansas.

“Today was a lot tougher, and we’re definitely going to have to make some adjustments for tomorrow,” said Freeman. “I think the difference today was the clouds and the wind. We only had six keepers. We broke off some and lost a couple, but they didn’t feel that big. It’s weird – the fish aren’t really fighting, they’re coming straight up.”

“The wind was pretty bad today and it made fishing more difficult,” Soileau said. “We were using lighter weights, so I put a heavier one on to help with the wind, but then I stopped getting bites. Sometimes we had to make the exact same cast to the same spot three or four times in a row before you would get bit.”

The Warhawk duo said that they used four different baits Thursday to catch their six keepers, specifically mentioning a crankbait and a jig. They said that they fished backwater areas in Pool No. 4, targeting stump fields and rock piles on sandy points.

“We’re looking for anywhere the shad can gang up,” Freeman said. “In practice every fish we caught was spitting up crawfish pincers. Now there are a lot more gizzard shad around and everything is relating to the shad.

“Tomorrow we’re going back and going to really bang on our third spot,” Freeman went on to say. “We still have one spot that we have saved didn’t hit today. I’m not sure that it can kick out a big one, but I think it can kick out some keepers.”

The top 10 teams on the Red River that will advance to the final day of competition are:

1st: University of Louisiana-Monroe – Thomas Soileau and Hunter Freeman, both of Monroe, 10 bass, 26-11

Full results for the entire field can be found at FLWFishing.com.

The final 10 FLW College Fishing National Championship teams will take off Friday from the Red River South Marina, located at 250 Red River South Marina Road, in Bossier City, Louisiana, at 6:30 a.m. CDT. Friday’s Championship weigh-in will be held at the Bass Pro Shops located at 100 Bass Pro Drive in Bossier City, at 3:30 p.m. prior to the Day Two weigh-in of the BFL All-American championship. All takeoffs and weigh-ins are free and open to the public.