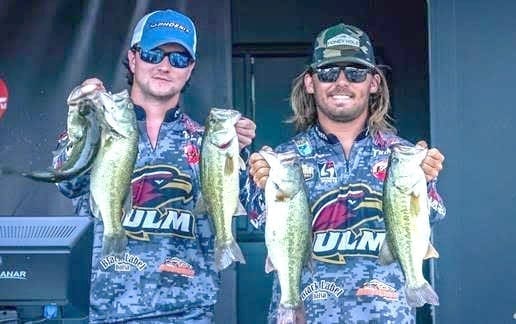 The University of Louisiana-Monroe team of Thomas Soileau and Hunter Freeman, both of Monroe, grabbed the early lead Wednesday after Day One of the 2018 YETI FLW College Fishing National Championship on the Red River presented by Lowrance C-MAP Genesis.

The Warhawk duo brought a five-bass limit to the scale weighing 14 pounds, 7 ounces, giving them a 12-ounce cushion over the second place team of Charlie DeShazer and Jackson Ebbers from the University of Nebraska.

“We locked down to Pool No. 3 to catch our fish today,” said Freeman, a junior majoring in business administration. “We really didn’t know what to expect. We came here three weeks ago to pre-practice and found a few areas that we felt could produce, but it’s much warmer now. The water is 95 degrees and it’s 2½ feet deep, so we backed up a little bit – and we found them.”

“We’re fishing a little deeper, offshore,” said Soileau, a recent criminal justice graduate. “Most of our bites came around 8-feet deep. We hit three or four spots, and caught one big fish off of each one. It happened pretty quickly.”

The duo said they stopped fishing their main areas around 10:30 a.m. and spent the rest of the day practicing and looking for new water. They managed eighth or nine keepers throughout the day, both fishing the same unnamed crankbait, although different colors.

“With having to manage the locks and everything, it takes almost two hours to get to our spots,” Soileau said. “It really takes up a lot of our fishing time, so every cast counts.”

“One of our spots should be replenishing. With the hot conditions and a little bit of wind it’s setting up perfectly,” Freeman said. “We cut out a little early today and left them biting. Some other teams are fishing around us, but we’re doing something no one else is doing. Our plan is to do the same thing tomorrow and hope they’re still there.”

Meanwhile, it was a tough day for the two LSUS teams competing.

With temperatures nearing triple digits on day one at the weigh in site at Red River South Marina, it was obvious that the heat did not make the fish aggressive as only 60 of the 168 teams were able to catch their limit. Both LSUS teams only managed three fish each and are deep in the standings to start day two.

The angler duo of Ryan Antee and Harrison Hopkins, who won the tournament on the Red last fall to qualify for this event, totaled five pounds and eight ounces and are in 70th in the standings.

J. P. Kimbrough and Jared Rascoe did not fare any better as they find themselves in 95th spot with four pounds and two ounces.

The four-day event features 168 of the top college bass fishing teams from across the nation competing in the internationally-televised tournament for the top prize of $30,000, including a new Ranger Z175 boat with a 90-horsepower Evinrude or Mercury outboard.

The National Champions will be crowned on Friday based on the cumulative three-day weight total. The winning team will then advance to compete in a one-day fish-off on Saturday against each other on an undisclosed local fishery, which will be revealed at Friday’s weigh-in. The two anglers will weigh in Saturday at 3:25 p.m. prior to the final weigh in of the T-H Marine FLW Bass Fishing League (BFL) All-American championship at Cross Lake. The winner will receive entry into the 2018 Forrest Wood Cup, the world championship of bass fishing, held August 10-12 on Lake Ouachita in Hot Springs, Ark.