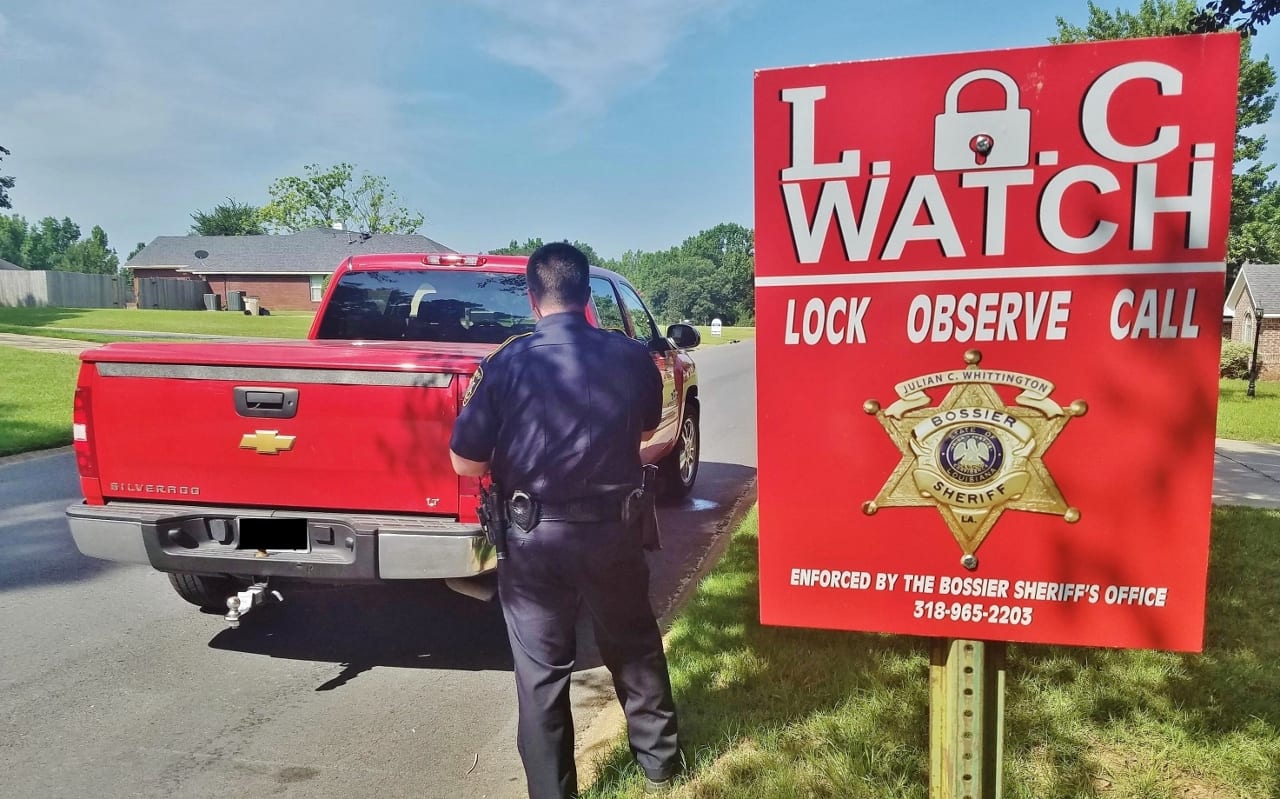 Vehicle burglaries in Bossier Parish are down significantly over the first six months of this year.

“We have seen the number of vehicle burglaries decrease by an incredible 41.3 percent during the first half of this year when compared to this same time period last year,” said Sheriff Whittington.  “While zero car burglaries is our goal, this significant reduction is a huge step in the right direction.”

From January thru June 2018, Bossier Sheriff’s Office worked 63 cases of vehicle burglaries; during that same six-month time period in 2019, deputies and detectives have worked 37 cases.  That equates to a 41.3 percent reduction of vehicle burglaries over an extended period of time.

Sheriff Whittington attributes much of that decrease to three proactive measures he has implemented – (1) the roll-out of the L.O.C. campaign in late October 2018; (2) the creation of the JCAT (Joint Criminal Apprehension Team), also in October 2018; and (3) increased traffic stops by patrol deputies this year.

(1) L.O.C. is the anti-vehicle burglary campaign that encourages residents to L – Lock their doors; O – Observe their surroundings; and C – Call and report suspicious activity.  Yard signs and street signs were distributed throughout the parish to help serve as a reminder of the importance of securing your vehicles and monitoring and reporting suspicious activity.

Deputy Brandon Masters oversees the L.O.C. program, and he says he is encouraged by the number of residents and neighborhoods who are getting onboard with the program.  “We are also seeing the use of video surveillance camera systems strategically placed in subdivisions as deterrence to crime and as a way to catch criminals.”  If your neighborhood or business wants to know more about the L.O.C. campaign or the use of surveillance cameras to further combat vehicle burglaries and other crimes, contact Dep. Masters at (318) 965-3412.

(2)  JCAT is a combination team of the Bossier Sheriff’s Office and Bossier City Police Department that provides proactive criminal patrol in the city as well as the roads and neighborhoods throughout Bossier Parish in an effort to seek out individuals or groups of individuals that are otherwise up to no good.  The team was created in October 2018 by Sheriff Whittington and Bossier City Police Chief Shane McWilliams in an effort to curb vehicle burglaries throughout the parish.

Lt. Dave Faulk is the supervisor of JCAT.  “There is no doubt that a strong proactive approach has a significant role in lowering the amount of criminal activity within our community,” he said.  “I’m very proud of the team we’ve selected, and each one of them plays a vital role in our success.”

“Traffic stops are about public safety, and it’s usually the first, and sometimes, only interaction the public has with a law enforcement officer,” said Maj. Charles Gray, patrol commander.  “During those stops, we typically issue warnings nearly 85 percent of the time without having to write a citation.  But the traffic stop also shows that we are out and about, and that visibility sends a message to a would-be criminal, including a vehicle burglar, to stay away.”

In addition to the reduction in vehicle burglaries, Bossier Sheriff’s Office has seen a reduction in crime across the board for the first six months of 2019.  Nearly every person and property crime category, to include robbery, homicide, burglary, and motor vehicle theft, is down by 12 percent overall when compared to the same time period last year.

“There is one other factor that attributes to this decreased crime rate in Bossier Parish,” said Sheriff Whittington.  “I commend the outstanding residents of Bossier Parish who play a crucial role in crime prevention by reporting things that just don’t look right.  They have said ‘enough is enough’ and have joined our efforts to help combat vehicle burglaries and other crimes.  As your Sheriff, you can count on me and our team to commit to public safety as our top priority.  With your help, we can continue to make Bossier Parish a premier place to live, work, worship and raise a family.  I am proud to call Bossier Parish my home!”