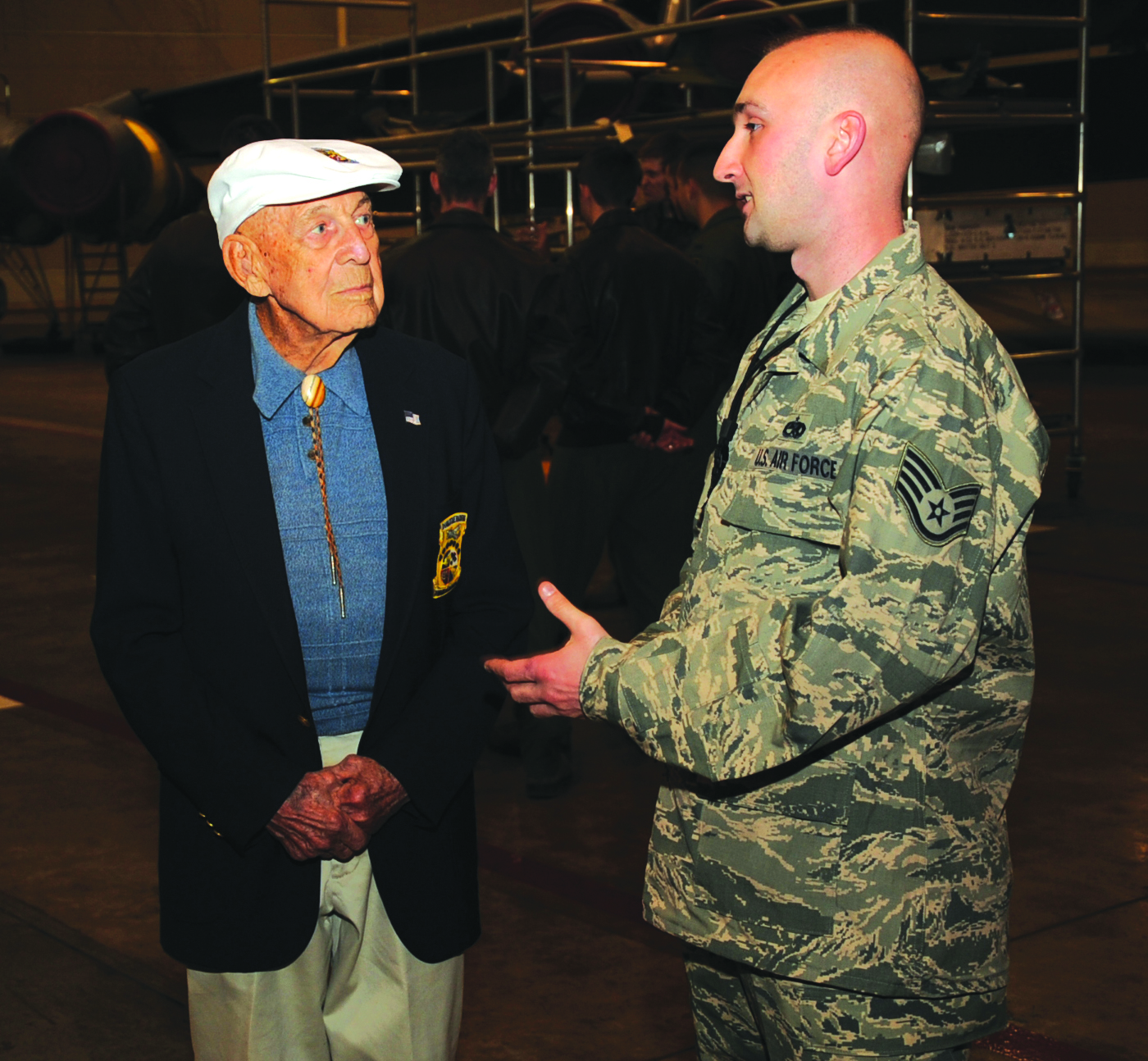 BARKSDALE AIR FORCE BASE — While the U.S. Air Force is often celebrated for its use of technology and reliance on hardware, a Doolittle Raider’s visit to Barksdale Dec. 30 re-enforced that the Service’s true strength stems from well-trained, innovative Airmen working jointly.

Retired Lt. Col. Richard Cole, who served as (then Col.) Jimmy Doolittle’s copilot during the April 1942 raid on Tokyo, spent the day meeting and sharing anecdotes with Airmen from across Team Barksdale.

Throughout his visit, the soft-spoken 98-year-old projected humility as he recounted his role in the historic mission that provided a morale boost to the American public after the Japanese bombardment of Pearl Harbor, and continually emphasized that its success was due to the training and professionalism of the volunteer aircrews.

When asked by one Airman if he was nervous prior to the mission, which involved launching B-25 bombers from the deck of the U.S. Navy’s USS Hornet, Cole said, “I was not worried about taking off at such a short distance. One reason was that we had a good training experience, the other thing is that I was flying with one of the best copilots in the world.”

Cole’s training prior to the mission included more than 60 hours of instruction at Eglin Airfield in Florida, part of which was spent with a Navy pilot sent from Pensacola to teach the aircrew how to accomplish a short carrier takeoff.

The aircrews also received training in celestial and sea-based navigation and low-altitude flying.

Ultimately, all of these skills would be employed by the crews during their mission, which explains why, when asked what advice he has for Airmen today, Cole said, “Get as much training as you can. Take advantage of it when the opportunity presents itself.”

Cole’s message was not lost on Barksdale Airmen, many of whom lined up to shake his hand, take a picture or receive an autograph.

“To be able to meet Cole is a once in a lifetime opportunity,” said Capt. Garrett Houk, a weapons and tactics officer with the 96th Bomb Squadron, “The fact that, as a 26-year-old, he volunteered for a mission like that is amazing.”

This type of fanfare is seemingly lost on Cole.

“I never thought about how important our mission is and was to the Air Force and its history,” Cole said. “I was just happy to be able to do my job and be a member of this Air Force.”

As he looked across at the dozens of Airmen assembled to meet him, Cole added, “I feel that the Doolittle Raid still has meaning for us today. If there is a time that comes up in the future that some country wants to upset our form of government, independence and freedom, then we will be able to do something similar to prove our strength.”