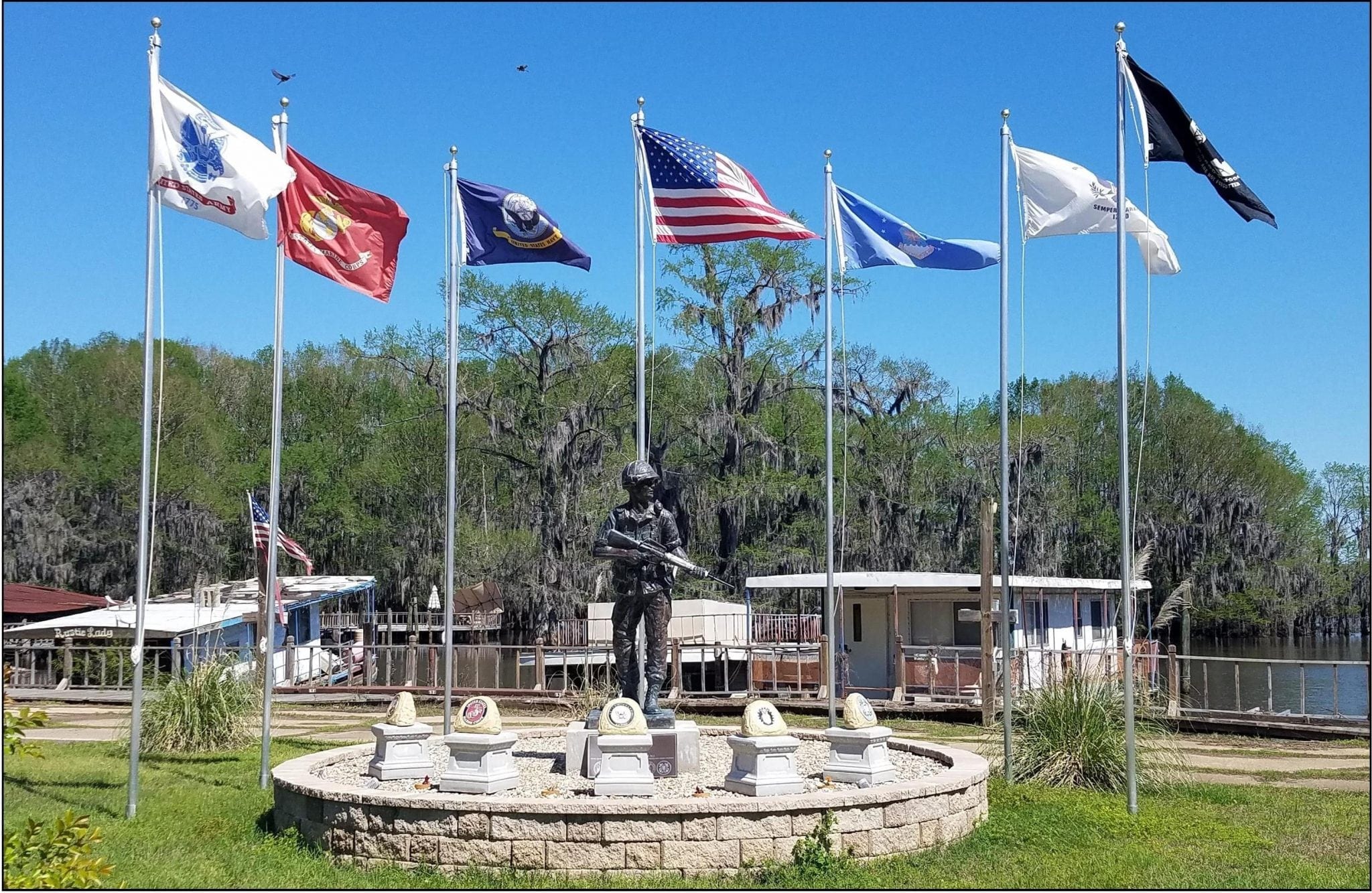 A “Veterans Memorial” dedication ceremony will be held at Camp Joy at Lake Bistineau on Friday, May 18, at 10 a.m. as the nation celebrates Armed Forces Day this weekend to thank those who serve in the military.

The special memorial honoring all branches of military service was designed and erected by Kate Davis, owner of Camp Joy, as a way to express her appreciation for the sacrifices of the men and women of the armed forces.

“Freedom and liberty are very important for me,” said Kate.  “This is something I’ve always wanted to do, something for the men and women in uniform.  But I didn’t know what.”

Norman Craig, a Marine Corps veteran who served from 1957 – 1961, will be the guest speaker. He attained the rank of corporal, and just before he completed his service in the Marine Corps, he married Suzanne in 1960, and they currently live in the Haughton area.  Craig taught school for a few years and was a businessman for many others. In 2007, he sold his business in Haughton and came to work for the Bossier Sheriff’s Office, where he served primarily as the commander of the Bossier Sheriff’s Young Marines and a School Resource Officer.  Just recently, Craig was selected by the Bossier Parish Police Jury to fill the District 4 seat left vacant after Police Juror Sonny Cook resigned.

The Parkway High School band led by Director Mark Minton will play patriotic music at the ceremony, and the Haughton High School AFJROTC will perform as color guard. Meredith Johnson of Bossier City will sing the National Anthem.

Veterans from World War II to today will be special guests, and every veteran will receive a special token thanking them for their service as a way of saying “Thank You.”

In March 2017, Kate erected the memorial, which features a large soldier on patrol duty carrying a rifle. The soldier is surrounded by five special stones depicting each of the military branches of service. These special stones were painted by a Camp Joy resident whose son has been deployed seven times to Iraq and Afghanistan, and they were her gift to the memorial. There are also seven flag poles with the different service flags, U.S. flag, and POW flag.

But the project didn’t come easy, recalls Kate.  A few years ago, Kate had two back surgeries, and then the historic flood at Lake Bistineau in 2016; she says she lost everything.

“I had to redo everything from ground zero.”

She said this was the right time for the memorial, “By the grace of God, it took a beautiful shape, and I’m just so thrilled that I could do something. People are forgetting about the veterans, and they don’t really know who protects our liberty and freedom.”

“This was a project of love,” said Kate, who is originally from India. “My hope is that we will never forget about our veterans, and we thank them from the bottom of our hearts for what they have done for our country. We are the greatest nation because of their sacrifices.”