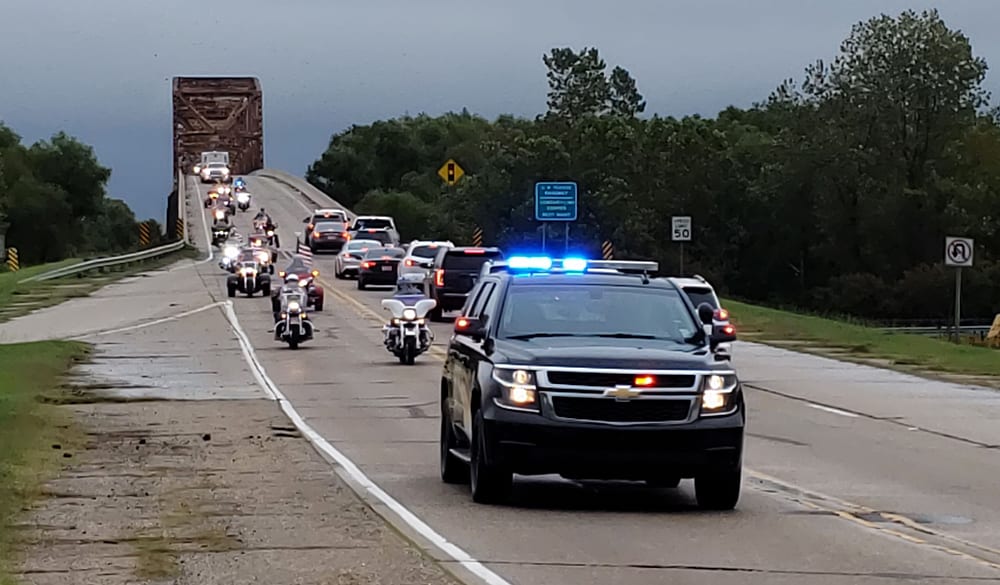 Escorting such an important wall of this significance is important to Sgt. Johnnie Estess and his team.

“It means a great deal for us,” said Sgt. Estess, who was joined by two other deputies and Posse volunteers.  “We were fortunate to escort the original one that came in a couple of years ago to Margaritaville.  It means a lot to us.  My hat’s off to them (veteran), God bless them, and we keep them in our prayers.”

Louis McGinty is with Veterans for Veterans, who is hosting the traveling wall over the next few days.

“We’ve done this in the past to acknowledge just what this wall represents and to say that we appreciate it,” said McGinty, also a Vietnam veteran.  “We hope that people come out during the few days this will be at Riverpark Church and look at this.”

After the chaplain prayed for their safety on the journey, the group escorted the traveling wall during the damp and rainy Wednesday afternoon.  It’s an honor, they say, but not just for those conducting the escort, but those who are carrying the wall around the country.

Lucky Harper is the assistant manager for the Vietnam Traveling Memorial Wall, and he saw something along the route from Haughton to Shreveport that touched his heart.

“We were pulling out, and as we got all the way straightened out, I looked over, and there was an SUV with four younger guys in it,” said Harper, who served tours in Vietnam and Korea as an Airborne Infantry.  “They got out and put their hats over their hearts as we came by.  They just stopped right in the middle of the road, didn’t even pull over.   That makes me realize that maybe our country hasn’t gone to the dogs after all.”

Harper says bringing the traveling wall here is so important.  “This a volunteer job, this a labor of love.”

The Vietnam Traveling Memorial Wall will be on display through Nov. 4 at Riverpark Church on 3232 E. 70th St., Shreveport.  Veterans for Veterans is hosting the event, which will also feature a Veterans Biker Event.  The family event open to the public, and they will have music, food and drinks (no alcohol), a bike show, bike games, a car show, a silent auction, speakers and proclamations.  Find out more by going to www.veteransforveterans.com.

You can see more photos below (all courtesy of Lt. Bill Davis, Bossier Parish Sheriff’s Office):