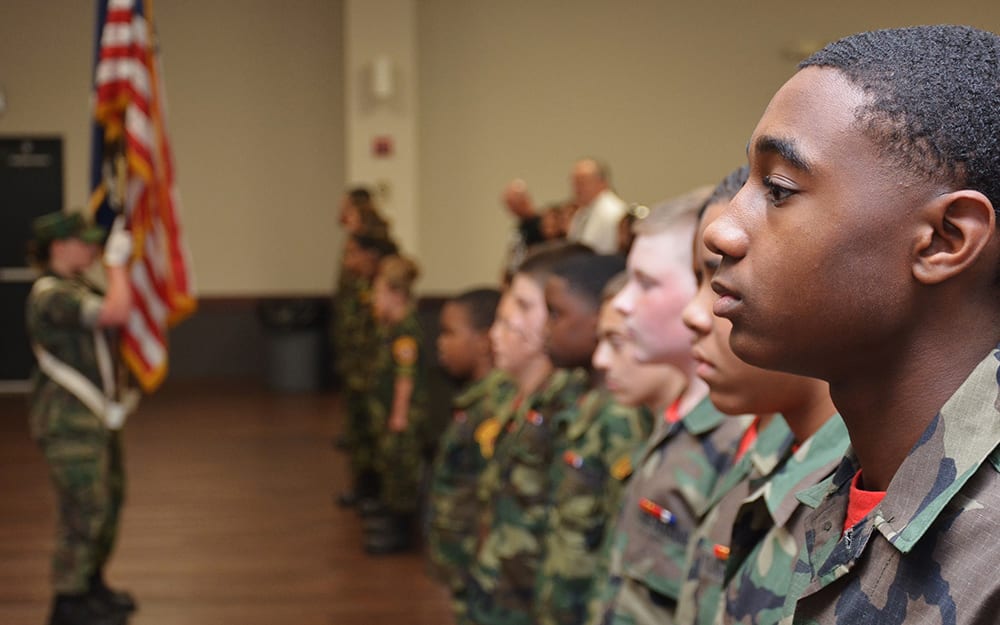 They have been training over the past two weeks to earn the title of Young Marine, and the graduation ceremony was the culmination of a lot of hard work.

“The teamwork and discipline they learned in the program will help them develop into the future leaders of tomorrow,” said Sheriff Whittington.  “They are setting the foundation to become problems-solvers and team builders, and these are traits that will carry them well in life.”

Air Force Lt. Col. Michael Green, Jr., Commander of the 343rd Bomb Squadron, 307th Operations Group, 307th Bomb Wing at Barksdale Air Force Base, was the guest speaker.  He showed the Young Marines a model of the B-52, and he said it’s his job to lead a team of five people when flying the aircraft.  He emphasized the importance of teamwork to get the aircraft airborne and how teamwork will be crucial for them as they move forward in life.

“These kids have stolen my heart!” Dep. Webb said.  “It is going to be an amazing adventure and honor watching them grow and mature into fine young ladies and gentleman over the years.  Semper Fidelis!”

The recruits ranged in age from 8 to 15 years old, with the average of only 11 years of age.  The honor graduate was Bailey Moore, 13; she was also meritoriously promoted to private first class.  The Iron Mike Marine Award was presented to Javarion Townsend, 11, for being the boy with the most military bearing during the training, and the Molly Marine Award was presented to Ruhamah Njua, 11, for being the most motivated female.  Elijah Gee, 15, received the Motivation Award.

Young Marines staff members who also trained the boys and girls were Deputies Marissa Townsend and Clay Christian.  Young Marines volunteers who helped during the training and ceremony, to include performing color guard, were Sgt. Meredith Pinkston, 15; and Cpl. Destiny Buckner, 12.

To find out more about the Bossier Sheriff’s Young Marines program, call 965-3500, go online at www.bossiersheriff.com  or visit the Viking Drive Substation at 2510 Viking Drive in Bossier City.

You can see a gallery below (Stills by Dep. Rod White/Bossier Sheriff’s Office):