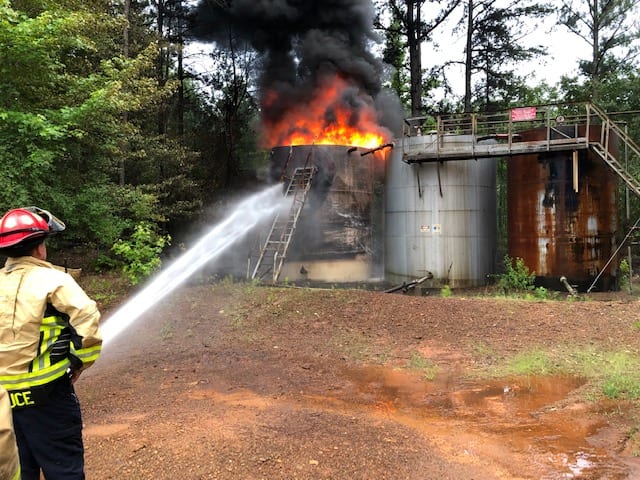 A fire at an oil well tank battery Friday near the state line in north Bossier Parish caused an oil tank to explode.

“This was a very close call,” said Fire Chief Marvin Aldrich, Bossier Parish Fire District #7. “Thank God all were okay.  It had to be God’s hand protecting us.”

Around 6 a.m. Friday, multiple firefighters from Bossier Parish Fire Districts 5 and 7, along with Bossier Sheriff’s Office deputies, were dispatched to an oil well site off of the 10800 block of LA Hwy. 3 — about halfway between the town of Plain Dealing and the Arkansas state line. One of the three oil well tank batteries had caught on fire.

Fire Chief Jason Vaughan, Bossier Parish Fire District #5, said there have been some close calls in the past, but nothing like this.

“I broke down and cried,” he said. “God put His hands and moved that tank away from us.”

Sgt. Buck Wilkins with the Bossier Sheriff’s Office was working traffic control on nearby Hwy. 3 when the explosion occurred.

“I was worried to death that something was going to happen, and it’s a miracle nothing happened.”

You can see a video recounting the harrowing experience below: