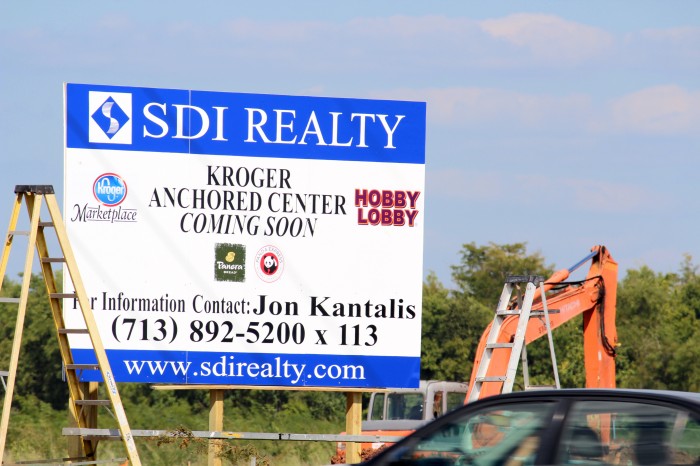 The Viking Drive industrial park is steadily filling up and is set to become a major frontage road once a retail development locates nearby.

The north Bossier location will be joined to the Kroger Marketplace development by a relief road that is well underway. In addition, an area that began years ago with 65 acres only has 15-20 acres left.

“We are way down (in available acreage) from where we started years ago. There is some acreage left and we are entertaining offers,” said Rocky Rockett, president of the Greater Bossier Economic Development Foundation (GBEDF).

GBEDF is responsible for selling the spots to businesses. Something that, according to Rocket, depends on number of jobs, budget, and the facility itself.

“Our initial effort was to spur job growth and it’s been successful in that. The return on investment is job creation,” he explained.

With the relief road running from Viking Drive, behind the Home Depot store to the new Kroger Marketplace retail development, between the Home Depot and Walmart stores off Airline Drive, the potential is there for more retail to set up shop in the area.

“There are no immediate plans to build on that relief road, but people who own that property could sell to a retail establishment in the future,” said Mark Natale, public information officer for Bossier City. “It is prime for development.”

Natale says that the forecast for the Viking Drive park is more focused on office space and industrial buildings, he says the relief road will mean more traffic and that means more eyeballs.

“With the relief road being built, it is going to mean more traffic on Viking Drive, and that would be something desirable for any business.”

Rockett also acknowledged this by saying, “That road is going to alleviate some traffic on Airline but will bring customer potential into that land for possible development and has the ability to add some really good retail.”

The future is even brighter for the area now that Swan Lake Road, which runs perpendicular to Viking Drive, has been widened for greater access from local drivers.

“The city always had the belief that widening Swan Lake Road would facilitate development along that corridor and since it is an artery that feeds into Viking Drive, that development could easily spread to that area,” said Natale.

As the Viking Drive park becomes filled with more clients, is made more accessible by the Swan Lake Road widening and attracts more drivers with the relief road, it is not hard to see a time where Viking Drive itself would need to be widened.

Bossier City Engineer Mark Hudson estimates there will easily be several thousand vehicles per day utilizing the road, and that will only increase with further development.

Natale notes that the city is eyeing the widening of Viking Drive as a future possibility, but for now it is on the “back burner.”

He explains the hold up is money. A conservative estimate from Bossier City Engineer Mark Hudson places the cost to widen Viking Drive between Airline Drive and Swan Lake Road at $6 million.

“We’re in the middle of the George Dement Boulevard project (a road leading from Airline Drive to the Kroger Marketplace development) and the relief road to Viking Drive project. Once that’s finished, there could be financial evaluations to see if resources are there.”