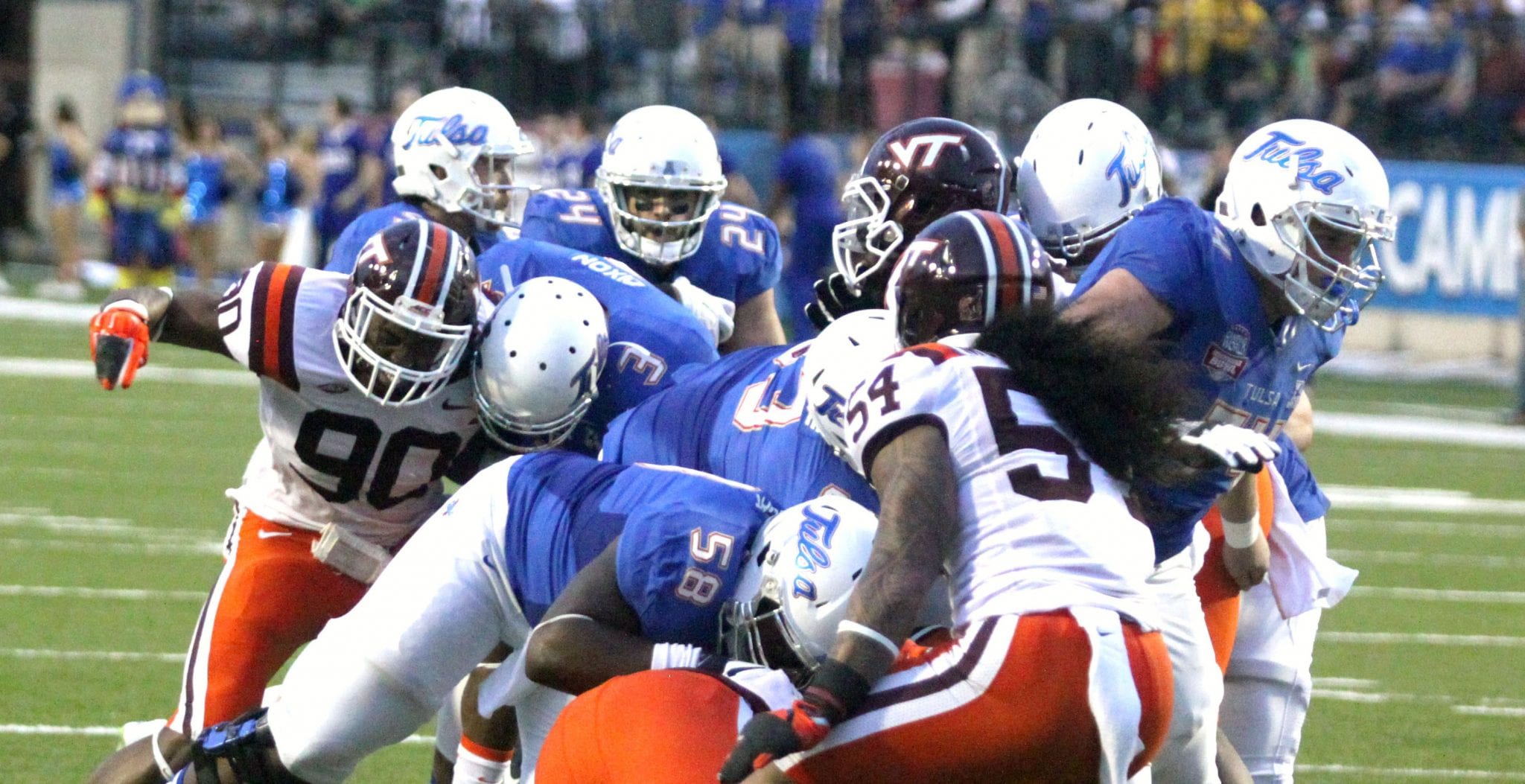 Virginia Tech led by as many as 24 points in the second quarter. The Hokies still led by 18 after kicking a field goal with 11:09 left in the game. But Tulsa got within three and had the ball at its 20 with 1:54 to play.

In a game of big plays, all it would’ve taken was one to either win it for the Golden Hurricane or get them in a position to tie it with a field goal.

Tulsa advanced to a first down at its 46. On second-and-10, Dadi Nicolas and Luther Maddy sacked Dane Evans for a 6-yard loss. After an incomplete pass, Nicolas sacked Evans again for a loss of eight.

“We haven’t been in many games like this,” Beamer said. “Usually when we score as many points as we did tonight, it’s usually a done deal. I give them credit. We needed a big play. If we give (Evans) time to throw and those receivers, there’s going to be a lot of completions, which they had. The best way to combat that is to get him sacked, get people around him or get him sacked. That’s what we did at the end of the football game.

“That thing was going back and forth. I haven’t coached many games like that. Again, I appreciate the way we hung in there and battled and found a way to win.”

“I feel like an old man up here,” Beamer said. “There have been a lot of fourth quarters. I’ve said all along, I’m a fortunate guy. To have hung around at one school and had the people around me, the administration, to be able to stay at one place in this business for 29 years, I’m amazed myself. I would have kicked myself out a long time ago.”

Beamer didn’t expect the game to be the shootout it became.

“These seniors laid the foundation for what we’re going to build on,” Montgomery said. “You have only have one first — your first team and first group of seniors, and we’re a tight family.”

“We finally got a little bit of momentum,” he said. “Down 24 for our guys, we’re not paying that much attention to ball, and it doesn’t matter what the score is or how much time is left. We’re going to play the same way from start to finish. We’ve been in games like this, down 24 and come back and won.”

The game was an offensive show from the get-go. The Hokies tied the bowl record for most points in a game when they took a 45-21 lead on Greg Stroman’s 67-yard punt return for a TD with 7:11 left in the first half.

The Golden Hurricane scored 10 unanswered points to close out the second quarter and get back in the game.

Virginia Tech opened a 52-31 lead on Trey Edmunds’ 1-yard run with 7:38 left in the second quarter. But that was the only time the Hokies reached the end zone in the second half.

Isaiah Ford caught 12 passes for 227 yards, including a 75-yard touchdown.

Tulsa’s Evans completed 27 of 44 passes for 374 yards and three touchdowns with no interceptions. He also rushed for a touchdown.

D’Angelo Brewer rushed for 105 yards on 14 carries and scored twice. Zack Langer had 63 yards on eight carries and a touchdown.