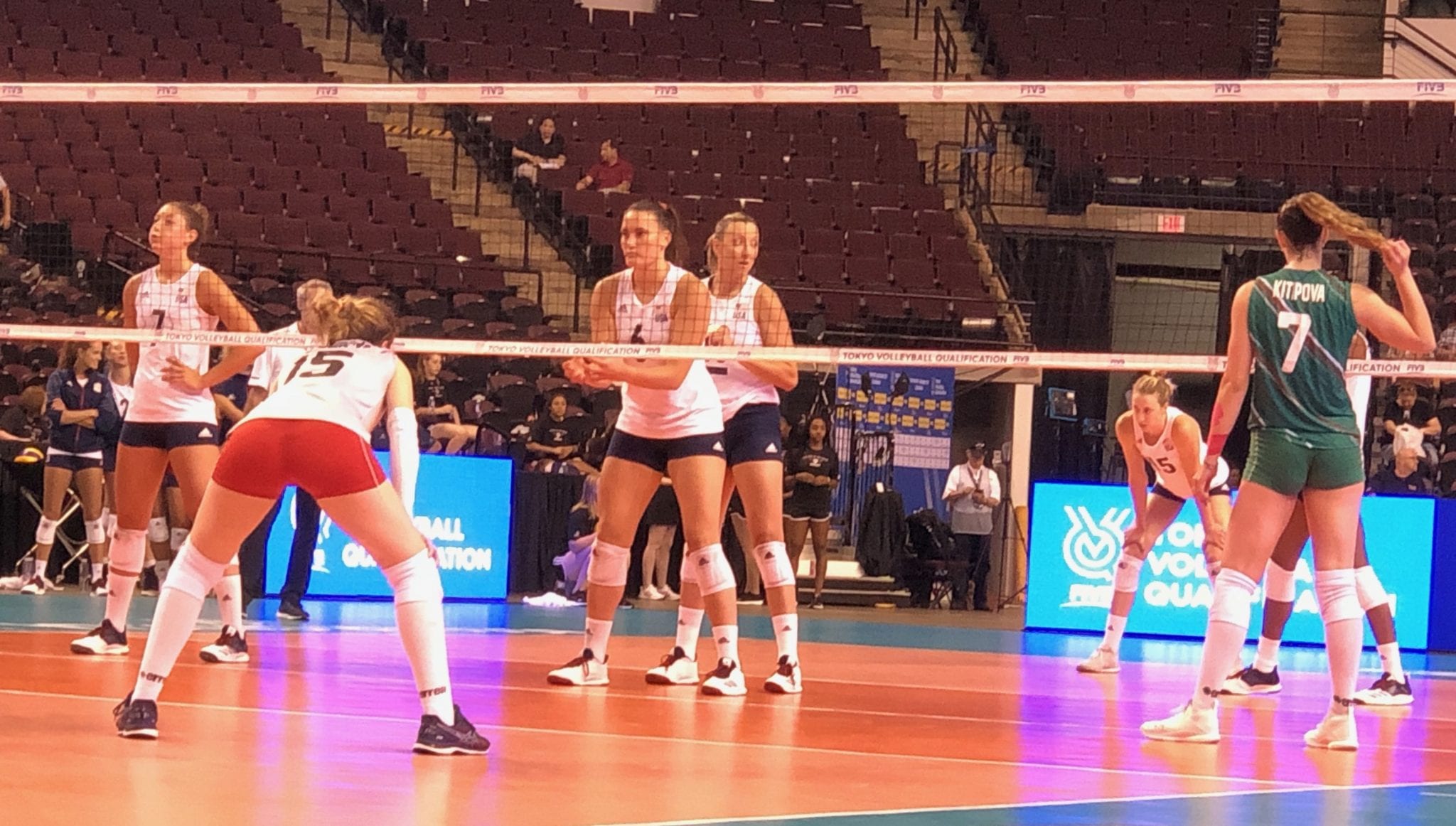 The U.S. Women’s National Team is step away from claiming a berth into the 2020 Olympic Games, but it was not easy as Team USA used a deep bench to rally past Bulgaria 21-25, 25-18, 21-25, 25-20, 15-10 on Saturday evening on day two of the Tokyo Women’s Volleyball Qualification Tournament Pool C at the CenturyLink Center.

Team USA, ranked third in the world, hosts No. 11 Argentina on Sunday at 1 p.m.

Team USA went up 13-9 in the fourth set and never let Bulgaria closer than two points in winning 25-20 and sending the match to the tiebreaker. Team USA scored six of the last eight points in the tiebreaker to solidify the vicoty.

“I got to give Bulgaria a lot of credit,” U.S. Women’s National Team Head Coach Karch Kiraly said. “They played a great game. #16 was all we could handle and more. We knew she was good, she had a very strong match. It took a while for us to get going.

“But Jordan Thompson came in and gave us a lift, and so did Kelsey Robinson. Eventually we started figuring things out. It was pretty rough, and we got pushed to the brink and I loved the response that our team had down 2-1.”

Opposite Thompson (Edina, Minnesota), who started the final four sets, totaled 19 points with 18 kills on 47 attacks and a block. Outside hitter Kim Hill (Portland, Oregon) nailed 15 kills on 37 attacks and two aces.

“It was amazing. I am still trying to catch my breath and take it all in,” Larson said of coming back in such an important match. “It was a stressful match. There was a lot riding on the line. It was important for us to take away the win.”

“We brought Kelsey in for a little of bit of energy,” Kiraly said of the move to bring in Robinson. “It seemed like things were getting a little flat at the end of the third set. Kim Hill was playing very strong volleyball, but we were little for a little bit of spark. It doesn’t always happen, but Kelsey was able to do that.”

“I am really proud of our team. I am proud how we fought,” Robinson said. “Bulgaria played scrappy, swung high and made some great digs. It was a really challenging match. I am proud how every single person on the team made an effort to help.”

“It was fantastic,” Larson said of the team’s bench support in defeating Bulgaria. “Jordan Thompson, she is still in college, but she has some guts. I am really proud her. Kelsey was steady and did her job.”

Team USA held dominated at the net with a 15-6 block advantage to go with an 8-4 margin in aces. Bulgaria managed a 76-71 edge in kills. Both teams limited their errors for the match with USA committing 11 and Bulgaria 13.

The U.S. started Carlini at setter, Drews at opposite, Dixon and Washington at middle, Hill and Larson at outside hitter and Courtney at libero.

The Tokyo Women’s Volleyball Qualification Tournament includes six pools of four team being staged in a round-robin format Aug. 1-4. The top 24 ranked teams, minus 2020 Olympic Games host Japan, are placed into the six pools using the serpentine system with pool winners claiming berths into the 2020 Olympics along with host Japan. The final five spots into the 2020 Olympics will be determined in early January through the five confederation zonal championships.

Team USA, the only country to medal in women’s indoor volleyball in each of the last three Olympic Games, seeks its 12th appearance in the Olympics. In its previous 11 Olympic Games, the Americans claimed silver medals in 1984, 2008 and 2012 along with bronze medals in 1992 and 2016.

Bulgaria started the opening set with an 8-4 advantage and held a four-point cushion to 13-9. Team USA put up consecutive blocks by Washington after a Drews slam to cut the gap to 13-12. Bulgaria raised its lead back to three at 17-14. The Americans pulled to within one with a Drews kill and Larson ace at 19-18. Hill connected for consecutive kills to put the U.S. into a 20-all tie. Bulgaria answered with three unanswered points for a 23-20 cushion. Bulgaria closed out the set with a 25-21 victory.

Bulgaria built an 8-4 margin early in set two. Trailing 10-6, the U.S. reeled off five straight points on Carlini’s serve that included two blocks from Dixon to give the Americans an 11-10 lead. Larson antd Thompson downed kills around a Dixon ace to yield a 15-13 American margin, but Bulgaria answered quickly to tie the set at 15-all. The U.S. took a three-point cushion on a Washington kill, Bulgaria centerline violation and Carlini block at 19-16. Dixon put up a block and Washington served an ace to extend Team USA’s lead to 22-17. Carlini served up an ace after a Dixon kill to give the U.S. a 25-18 victory.

The U.S. grabbed a 4-1 lead in the third set with Hill scoring a kill and ace followed by a Larson kill. Team USA went into the first technical timeout up 8-4 with kills from Thompson and Hill. Bulgaria went on a 7-1 run to stake a 13-11 advantage. Thompson nailed back-to-back attacks to level the set at 13-all. Bulgaria stretched its lead to 17-14 going into a USA timeout. Thompson hammered back-to-back kills, Dixon put consecutive blocks and Larson crushed one from the back row to reverse the lead to Team USA at 19-17. Bulgaria stopped the run with consecutive points to tie the set at 19-all, then scored the final five points for a 25-21 victory.

Larson knocked down back to back kills capping a 3-0 U.S. run putting it in front 8-6 at the fourth set’s first technical timeout. Thompson and Larson downed consecutive kills and Robinson put up a block to extend the lead to 13-9. After Bulgaria closed two, Washington and Thompson scored back-to-back points to put USA in front 16-12 at the second technical timeout. Thompson tallied consecutive kills to again create a four-point separation at 19-15. After Bulgaria closed to 21-19, Robinson hammered consecutive kills and Thompson put up a block to give Team USA set points at 24-19 advantage. Thompson finished the set with a kill at 25-20.