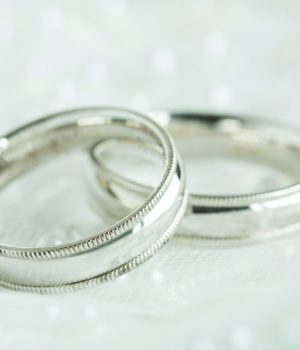 Emily Kate Hughes of Bossier City and Steven Christopher Susla of Haughton, were married on October 10th, 2015 at six in the evening at Sainte Terre Chapel in Benton, LA., with Mr. Tom Moore as the officiant.

Presented in marriage by her parents and escorted by her father, Emily was a beautiful bride in a Justin Alexander light ivory embroidered lace fit and flare dress with a pearl and crystal beaded sweetheart neckline and waist with a glistening chapel-length train. Emily wore a tiara headpiece of ivory pearls and crystals with a fingertip tulle veil highlighted with crystals. Emily’s bridal brooch bouquet was a special gift that included the groom’s maternal great-grandmother’s heirloom brooch.

The bridesmaids wore blush pink floor length gowns with the bride’s gift of an ivory pearl and crystal brooch at the waist. They each carried a floral bouquet of blush and ivory roses. The Maid of Honor was Ms. Lauren Wood and the Matron of Honor was Mrs. Ashley Grimes who are both long-time friends and classmates of the bride. The bride’s cousin, Miss Kelsie Shelton, and sister-in-law, Mrs. Chrissy Hughes, were bridesmaids. Also, attending as bridesmaids were special friends Cynthia Oldham, Jamie Beverage, Jenny Albrecht, and Stephanie Rice. Elly Grace Powell served as the Flower Girl.

Emily is a 2004 graduate of Parkway High School, attended Louisiana Tech where she was a member of Sigma Kappa sorority, and a 2010 graduate of Northwestern State University with a Bachelor of Science of Nursing. Emily is a nurse at Cornerstone Hospital.

After a honeymoon to Montego Bay, Jamaica, the couple will reside in Bossier City.