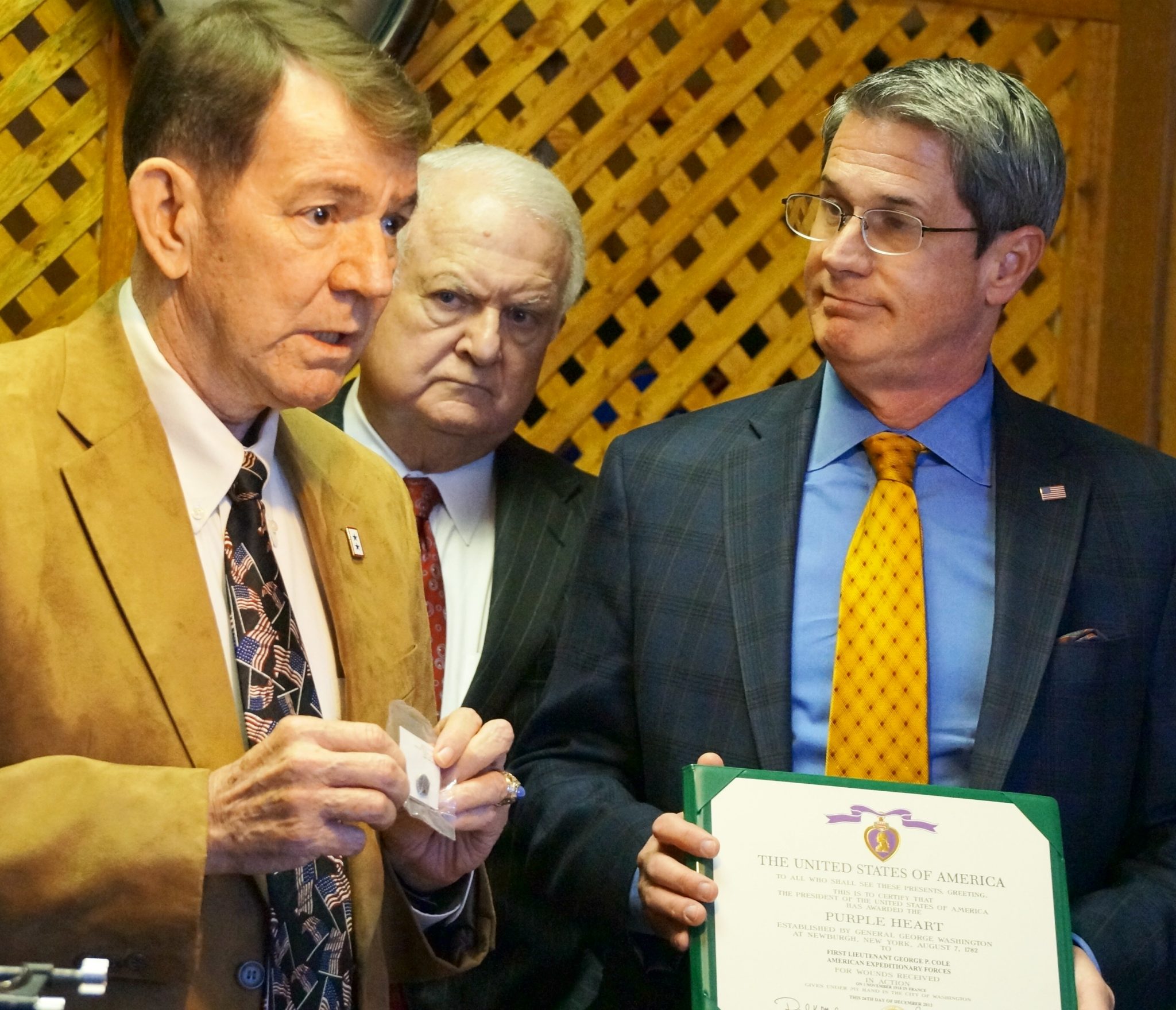 Sen. David Vitter is a man on a mission — listening, analyzing, speaking, and running for governor. And, therein, lies the tale.

In announcing his gubernatorial bid in a web video e-mail sent on Tuesday, Vitter promised that he would fight corruption, and furthermore, that running for governor will not interfere with his current job on Capitol Hill.

Vitter was in Bossier City Friday to visit Notini’s Restaurant on Airline Drive. He awarded posthumous medals earned by WWI veteran, 1st Lt. George Peyton Cole (US Army), who lost his life in 1918 while leading his men to take a key hill in France being held by the Germans. While their mission was successful, Lt. Cole was mortally wounded in that assault.

Although they were 93 years late, Vitter presented both the Purple Heart, and the WWI Victory Medal (with a France Service Clasp and St. Mihiel and Muse–Argonne Battle Clasp) to Brig. Gen. Peyton Cole, Jr. (USAF Ret.) on behalf of the great-uncle of his namesake, the deceased Lt. Peyton Cole. Along with Gen. Cole’s wife Kay, Barney Mercer form Dallas was there, however, unable to attend, Ralston & Chris Cole, cousins from New Orleans.

While present at the event, Vitter addressed the major issue on many people’s minds: the governor election in 2015.

During a recent one-on-one interview with the Shreveport-Bossier based radio show and website “Talk of the Town,” the two-term Republican senator from Louisiana answered a question that’s on most people’s lips: “Do you really think you can make a difference as a new governor?”

“Well, absolutely,” said Vitter, “With other’s people’s help. It’s gotta be a team effort, and it’s going to involve a lot of leaders joining me to make that effort, and that’s what I’m up to putting together.”

When asked about the key challenges he would face if elected, Vitter replied, “I think everybody would agree, it’s education both kindergarten thru 12th grade and higher ed. Certainly we need to stabilize higher education after these last several years of very tough budget years.

Sen. Vitter continued, “It’s job creation, economic development, making sure Louisiana is an attractive place to grow businesses, to bring businesses. It’s that budget stability I talked about. And we get there thru spending reform and tax reform, a pro-growth tax code, and smart spending reform, not just across-the-board cuts.”

He also candidly discussed the value of Barksdale Air Force Base and money for military retirees.

“Well look, with the current budget situation, we always have to be vigilant to protect necessary defense spending including here at Barksdale, and I’m always very vigilant about that with our delegation, and I feel good about that, and what we’ve been able to achieve. And so I’ll remain vigilant. That’s my first thought.”

“But my second thought is,” said Vitter, “Barksdale is a great asset, we don’t have to protect it as some sort of just Louisiana priority. It’s a great national asset. The Air Force gets that. The Pentagon gets that. And so, it’s easy to defend and protect in that sense.”