“Usually you hear people seeking political office promising to move forward. I promise to move back, back to a district attorney’s office that is honest, open and caring,” Bossier City attorney Whit Graves said as he announced during a news conference that he is running for district attorney in the 26th Judicial District that includes Bossier and Webster parishes.

Following nearly12 years with the Louisiana State Police, Graves graduated from LSU Law School. Immediately after passing the bar exam on his first attempt, Graves was hired by District Attorney Henry Brown as a prosecutor.

“It was truly a dream come true that I had worked toward for many years simultaneously working full-time and going to college,” Graves said. 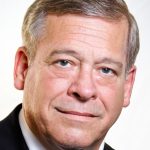 “With Henry Brown’s guidance and tutoring, I took my already strong foundation and built upon it, learning the valuable lessons about being a responsive and responsible attorney for the people of our district. Those lessons focused mainly on being honest, open and caring.”

After Brown’s election to the 2nd Circuit Court of Appeal, Graves rose to the position of chief prosecutor under D.A. Jim Bullers, handling the majority of murder, armed robbery and aggravated rape cases.

Bullers was seriously injured in a motorcycle accident and “the office, to put it delicately, fell below the standards I was accustomed to through no one’s fault except the deer Jim ran into,” Graves said.

After 12 years as a prosecutor, Graves went into private practice and later decided not to run for District Attorney when Bullers declared he would not seek re-election. Two years ago, when he ran for district judge, Graves said people told him they would rather he ran for district attorney.

Graves said he examined the potential of returning to his dream of 14 years ago after a large number of individuals encouraged him to take on the challenge of running for district attorney against a well-financed, two-term incumbent.

“No matter how long the list of negatives, the one thing that kept hitting me in the face was the chance to reinstate the lessons I learned from Henry Brown, how to be responsive and responsible for those we work for by being honest, open and caring,” he said.

Graves said if elected, he would make specific promises, including: