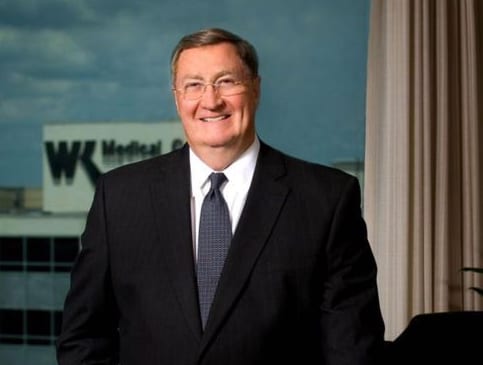 The Willis-Knighton Health System Board of Trustees has announced the extension of James K. Elrod’s contract as president and chief executive officer of the health system.

“The Executive Committee of the Board met to discuss the future of Willis-Knighton and agreed that, facing a time of uncertainty and changes in the healthcare environment, our greatest advantage in the continued success of Willis-Knighton is the leadership of Jim Elrod,” said Frank Hughes, MD, board president.

The board voted unanimously to request a two-year continuation of Elrod’s existing contract.  “After taking some time to consider our vote, Mr. Elrod graciously agreed to delay his retirement plans,” Hughes said. “This is a clear indication of his ongoing dedication and commitment to Willis-Knighton, and we are grateful for this decision. While we are pleased with the current senior leadership team assembled during the past 18 months, we felt that the greatest gift we could give them is additional time for mentoring and guidance. We made this decision in support of our physicians, our employees and the larger community.”

Under Elrod’s leadership, Willis-Knighton has grown from a small, nearly-bankrupt hospital to a health system that has grown to expand access to care and services and providing jobs for more than 7,300 employees. One of Elrod’s key recommendations was the tithe-the-bottom-line philanthropy initiative that reserves a portion of the health system’s profits to share with worthy community organizations and projects.

A press release noted that the not-for-profit health system is “well-positioned for the future and is financially strong, boasting favorable bond ratings from national ratings firms.”