Bossier City police arrested a woman Friday morning after she stole a car at a local convenience store and then led officers on a pursuit.

Laura Dann Perez-Rosa, 36, of Avinger, Texas faces multiple criminal charges including theft of a motor vehicle, aggravated flight from an officer, resisting an officer, possession of marijuana, and no driver’s license. She was arrested after Bossier City police responded to a report of a stolen vehicle just before 5 a.m. at the Circle K store in the 2400 block of Barksdale Boulevard. The victim told police she was putting gas in her car and went inside the store. When she came out, her car was gone. 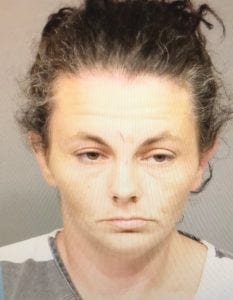 Not long after that, a Bossier City police officer located the stolen car heading south in the 4000 block of Barksdale Boulevard and attempted a traffic stop with his emergency lights and siren activated. The driver, later identified as Perez-Rosa, refused to stop and lead police on a pursuit that took them down Barksdale Boulevard and into the Golden Meadows subdivision.

The vehicle pursuit ended when the stolen car left the roadway at the dead end in the 5300 block of Foxglove Drive and stopped in a ditch.  Perez-Rosa then got out of the vehicle and ran from officers but was captured after a brief foot pursuit.

Perez-Rosa was placed into custody and found to be in possession of a small amount of suspected marijuana. Officers booked Perez-Rosa into the Bossier City Jail and returned the stolen car to its owner.