Bossier City police arrested a woman Wednesday for allegedly leaving five of her children – all under age 9 – at home by themselves. 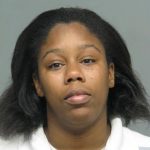 Jamie Lynn Tanner, 25, of Bossier City was arrested on five counts of child desertion after police responded at approximately 11:40 a.m. to a 911 hang up call at a residence in the 300 block of Wyche Street. When officers arrived they located the children – four girls and a boy, ages two through eight – inside the house with no adult supervision. Officers found that one of the children had dialed 911 while playing on the telephone.

While police were on the scene Tanner called the house and spoke with an officer. Tanner subsequently returned to the residence per the officer’s instructions. Police learned Tanner left the children alone at approximately 10 a.m. while she and her eight-month old daughter went to a doctor’s appointment. Tanner was taken into custody and booked into the Bossier City Jail.

All of the children were placed in the custody of a relative. As in all child desertion cases, police notified Child Protective Services of the incident.