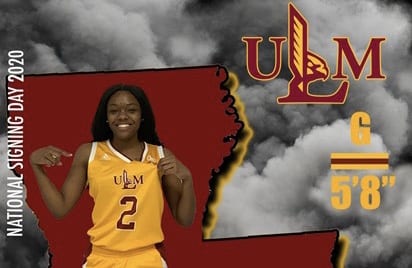 Benton’s Qua Chambers, the MVP on the Press-Tribune’s All-Parish team, signed with ULM on Wednesday.

“Qua is special,” ULM head coach Brooks Donald Williams said. “She is a winner. She has winning habits and comes from an incredible Benton program. Qua is an impact on both ends of the floor. She can disrupt folks defensively and has been able to score at will.”

Although Chambers’ senior year was cut short, her accolades were not.

Chambers was instrumental in guiding the Lady Tigers to the Class 5A state championship this season under the guidance of head coach Mary Ward. Chambers and company were the 4A runner-up in 2019 and semifinalists in 2018.

“I chose ULM because the coaches made me feel welcomed,” Chambers said. “We talked every day and we made a connection. I followed what my heart was telling me to do.”