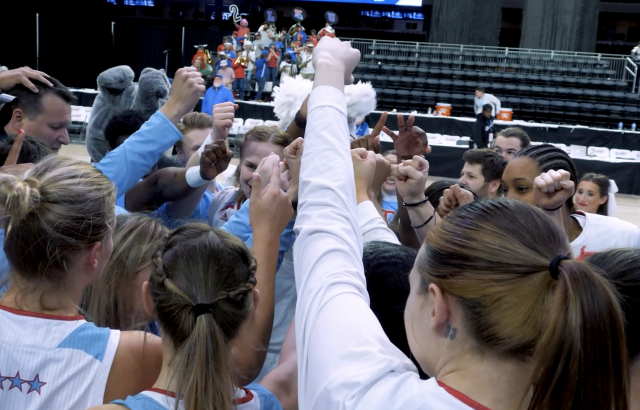 FRISCO, Texas – Believe. That was the message inside the Lady Techsters’ half-time locker room after finding themselves down 39-26 and their hopes of the first conference tournament title since 2010 slipping away.

Middle Tennessee (23-7) was absolute lights out in the first half hitting 10 of 18 shots from deep finding their rhythm early and often. However, Louisiana Tech (21-10), did just enough to keep within striking distance and never allowed Middle Tennessee to pull too far away over the first 20 minutes of play.

The Techsters would need a near-perfect fourth quarter to keep the tournament title dream alive, and that is exactly what they delivered.

LA Tech outscored the Blue Raiders 34-15 in the final stanza going 8-11 from the field including two huge threes from Lotte Sant and Amaya Brannon and made 16 of their 21 free-throw attempts as a team to close the game.

Within the run, Anna Larr Roberson scored six straight including four free throws off two separate intentional foul calls on the Blue Raiders. Roberson finished the night one rebound shy of a double-double with 23 points and nine rebounds including going 9-11 from the line.

Tech’s defense tightened up in the second half holding Middle Tennessee to just 5-20 from three after the hot start. Tech also out rebounded the Blue Raiders (33-27) and only gave up six offensive boards.

Tech extended their season-long winning streak to six games by completing the largest comeback of the season (13 points).

• Tech takes a six-game win streak into Saturday’s final’s matchup, their longest streak of the season, and the longest streak since 2017-18 (seven games).

• Over the win streak, Tech is averaging 75 points per game on 46.6 percent shooting, including 53.3 percent tonight.

• This will mark the first C-USA tournament final’s appearance for the Techsters. They improve to 1-1 in the semis.

• Saturday’s tournament final will be the program’s first since 2012 (WAC – loss to Fresno St.)

• Keiunna Walker has now scored in double figures in 30 of 31 games. This was Walker’s 12th game of 20-plus points and she has now scored 20 or more in five of her last six games, including three in a row.

• Walker moved past Racquel Spurlock for No. 28 on the all-time Techsters’ scoring list.

• Anna Larr Roberson has now scored 20-plus in five games this season.

• This was the third time this year that Walker and Roberson both scored 20 or more (Charlotte, Rice, Middle Tennessee).

• Salma Bates scored in double figures for the 1tth time this season and the third time in four games.

• Amaya Brannon had her eighth game of the year in double figures. She has scored 10-plus in back-to-back games for the second time this season.

• Tech’s four assists are the second-lowest in a game this season.

• Tech’s 23 made free-throws is the second-most made in a single game this season.

• Over the five-game win streak, Tech has shot better than 40 percent in each game.

The Lady Techsters will take on Charlotte in the 2022 Heritage Landscape Conference USA Championship to play for an automatic bid in the NCAA tournament. Tip-off is set for Saturday, Mar. 12 at 4:30 p.m. CT inside the Ford Center at The Star in Frisco, Texas.