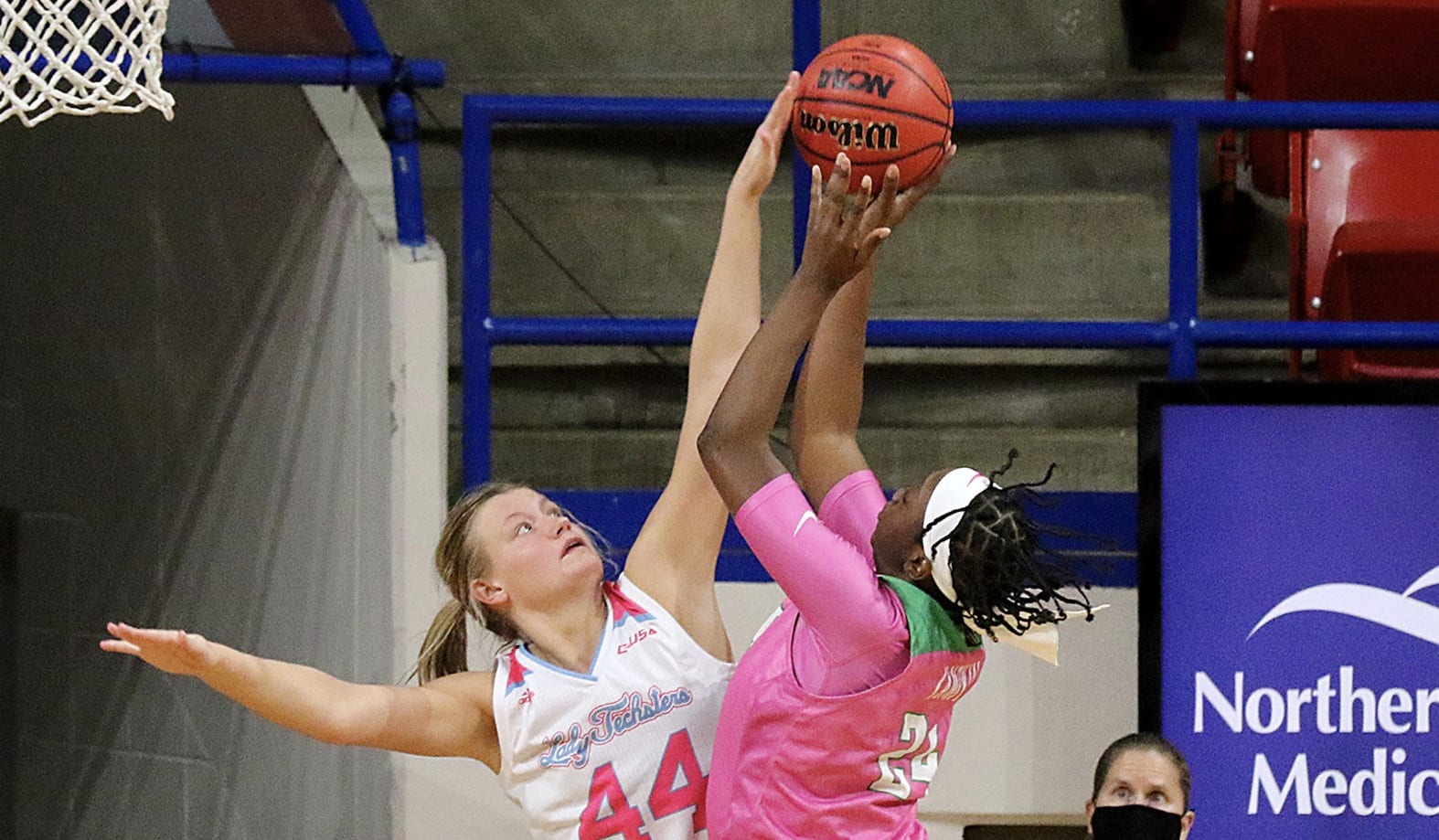 RUSTON, La. – Friday night saw a match-up of one of Conference USA’s top offensive teams against one of the league’s top defensive teams in the first of a two-game series between North Texas and Louisiana Tech.

Round one went to the defense.

Tech overcame some offensive adversity of its own by hitting 22-of-25 free throws, including 12-of-12 in the fourth quarter, in the win.

“That was the difference of the game because we weren’t very good offensively,” said LA Tech head coach Brooke Stoehr. “I’m really proud of our effort defensively and on the boards. We ended up outrebounding them by one.

“I was proud of our toughness. We had some really big defensive boards down the stretch. (Quincy) Noble gets 14 but I thought we did a nice job defending her, and we did a great job defensively overall. We have some things to correct, obviously, but I’m excited for the win and really proud of their effort.”

Tech held North Texas 19 points under its season average and the 55 points were the second fewest scored by the Mean Green in a game this year (52 vs. UTEP). North Texas entered game shooting 44 percent from the field and 37 percent from the three-point line, but the Lady Techsters held NT to just 20-of-69 shooting, including just 4-of-28 from deep.

“That’s what we wanted,” said Stoehr. “We can sit there and go, ‘Well, they shoot the three really well,’ and they do, but when they’re guarded, if you go and look at their numbers, they’re like anybody else that would be shooting a guarded 3-point attempt. We were really good with that. We have to be even better at it tomorrow.”

North Texas led 17-12 at the end of the first quarter and 27-25 at the half, but thanks to a buzzer-beating three-pointer by Raizel Guinto the Lady Techsters took some momentum into the halftime locker room.

“We felt good because we were down just two at the half,” said Stoehr. “That was a big momentum play. The difference was our posts stayed in line with the ball on the ball screen and she turned and handed it right to her and then it led to the 3-pointer by Raizel. That’s the thing is if we can just get them to do what we’re asking them to do and everybody does their job, it usually turns out pretty well.”

Walker, who hit just 2-of-12 field goals in the game, got to the free throw line in the second half and knocked them down. She also pulled down a career-high nine rebounds to help Tech win the battle of the boards 42-41.

“Walker’s rebounds were huge,” said Stoehr. “We’ll all look at her 17 points and go she led us in scoring, but her rebounds were huge. She had two really big ones down the stretch with under two minutes there that were really, really big. If we can get our guards rebounding like that, we’re going to be pretty solid.

“Keiunna is seeing every team’s best defender and they are putting a lot of pressure on her and trying to force some tough shots. We have to get her to slow down and we have to get her in good spots. She got to some really good spots and we were able to get her to the free throw line. You’d like to see those finishes and go into and-1s on those. That’s something we’ll continue to watch with her and keep her positive.”

With the two teams tied at 40-40 entering the fourth quarter, Tech outscored North Texas 20-15 over the final 10 minutes. Tech led just 56-55 after a three-pointer by Noble with 1:15 to play, but Walker hit two free throws with 1:07 to play to push the advantage back to three.

Following a potential game-tying miss by Noble on the next possession, Amber Dixon drew a foul in the front court and calmly sank two more free throws with 26 seconds to play.

Following a timeout, Tech got another Noble miss, pulled down the defensive rebound and ran out the clock for the win.

The two teams will meet again Saturday at 4 p.m.