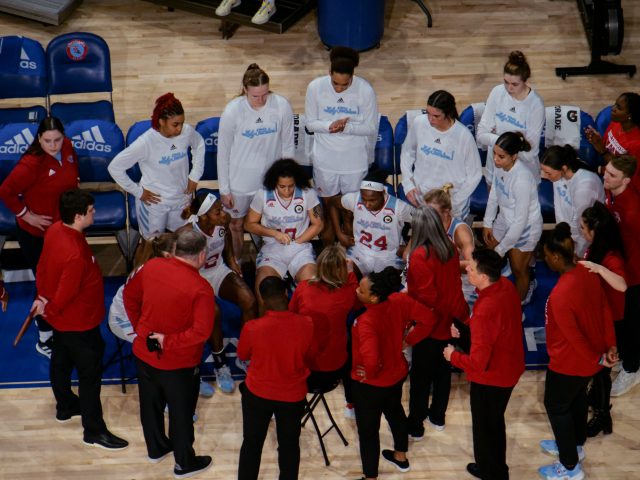 RUSTON – Louisiana Tech’s season came to a close with a 63-52 loss in the opening round of the WNIT to Houston inside the Thomas Assembly Center.

Both teams got off to good starts in the game, tied at 8-8 four minutes in, but turnovers and trouble on the defensive glass started to cost the Techsters over the remainder of the first half.

LA Tech (21-12) turned it over 11 times in the first 20 minutes, coupled with Houston’s (17-15) eight offensive rebounds, which led to a 10-0 advantage in second-chance points and 14-6 advantage in points off turnovers for the Cougars.

Tech shot well from the floor (.500) in the first half, but the extra possessions for Houston put the Techsters in at 35-28 hole headed into the locker room.

A clean sheet in the turnover column in the third quarter plus a big Salma Bates three-pointer to close the quarter pulled the Techsters within two possessions after three (49-43).

In the fourth, Houston’s junior guard Tiara Young scored eight of her 17 points to outpace Tech 14-9 over the final 10 minutes.

Tech finished the game shooting 41.7 percent from the field while Houston shot 40.9 percent. Neither team shot well from deep, with Tech shooting 27.3 percent and Houston just 12.5 percent. Houston’s advantage on the boards and in the turnover column led to 18 extra possessions for the Cougars and proved to be the difference in the game.

Amaya Brannon had another solid night across the board with five points, seven rebounds, and three steals.

• Tech now leads the all-time series with Houston 6-5 and falls to 4-2 in games in Ruston.

• Tech is now 1-4 in WNIT games in program history.

• Keiunna Walker finished the season scoring in double figures in 32 of 33 games.

• Walker finished the season as No. 27 on the all-time scoring list for the Techsters with 1,403 points. She will pick up next year eight points away from Monica Maxwell for No. 26.

• Walker recorded two more charges on the night giving her 43 on the year.

• Anna Larr Roberson finished her season scoring in double figures in 28 of 32 games.

• Roberson finishes the season with 955 career points, just 45 shy of becoming the 44th Techsters to reach the 1,000-point mark.