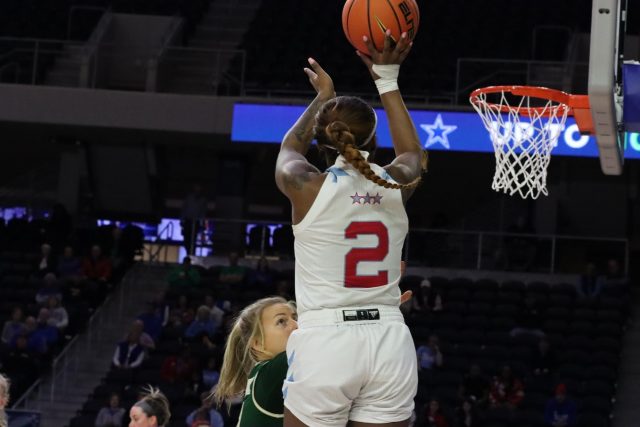 FRISCO, Texas – Louisiana Tech got 29 points out of their first-team all-conference guard Keiunna Walker Thursday afternoon to knock out UAB (71-65) to advance to the semifinals of the Conference USA Championships in Frisco, Texas.

The win gives Tech their first 20-win season in 11 years and moves Brooke Stoehr into third all-time in program wins, passing Teresa Weatherspoon, as a head coach with 100.

Tech finished a 3-0 season sweep of the Blazers beating them in back-to-back games and now won four straight over UAB. Tech also improves to 2-0 against UAB in the C-USA tournament.

The Lady Techsters picked up right where they left off last Saturday, getting off to a 7-2 start to the game, and ended the first stanza with a five-point advantage (21-16) behind nine points from Walker and five of Robyn Lee’s nine points off the bench.

After a back-and-forth second quarter Salma Bates hit a jumper at the buzzer, her fifth buzzer-beater of the season, to extend the Techsters’ lead to 35-26 at the half. Bates finished the game in double figures with 10.

The Techsters used more timely buckets and big stops in the final quarter including a big corner three from Amaya Brannon in a two-point game and a Walker steal and layup to keep UAB at arm’s length to close their opening-round game 71-65 in the Ford Center and The Star.

Brannon had another solid night finishing with 11 points and four rebounds.

Anna Larr Roberson had six points on just 3-11 shooting but had her tenth double-figure rebound game with 10, all defensive.

• Tech takes a five-game win streak into their semifinal matchup.

• This will mark Tech’s second visit to the C-USA semifinals.

• The win gives Head Coach Brooke Stoehr 100 for her tenure at LA Tech moving past Teresa Weatherspoon for third all-time.

• Coach Stoehr’s 20 wins this season are also the most wins in a season at Tech and is the first 20-win season for the program since 2010-11.

• Keiunna Walker finished the regular season scoring in double figures in 29 of 30 games.

• Roberson took her sixth charge of the year while Kate Thompson took her first. The Techsters have now taken 71 charges on the year.

• Salma Bates scored in double figures for the tenth time this season and the second time in three games.

• Amaya Brannon had her seventh game of the year in double figures.

• Tech’s four assists are the second-lowest in a game this season.

• Over the five-game win streak, Tech has shot better than 40 percent in each game.

“I am very proud of this group for their effort today. It is March and, in the postseason, you’re just trying to continue to advance to play another day. This group has been ready to play since Monday and sometimes it can be difficult to stay patient and then perform. We were able to get stops when we needed them in the fourth quarter. Randy does such a great job with his group, and I knew they would make a run in the second half. Keiunna was able to get to the rim and score some critical baskets for us when they were making their run. We had a balanced scoring effort today and that’s what we’ll need as we continue to advance.

Robyn, Kate, and Lotte gave us big contributions off the bench. I thought Sal had a terrific floor game and really controlled tempo for us. Amaya and Anna Larr battled inside and made some key plays when we needed them on both ends of the floor. It’s a quick turnaround and we’ll have to recover and give them a great plan for an opportunity to advance against a very good Middle Tennessee team tomorrow night.”

The Lady Techsters will take on Middle Tennessee at the 2022 Heritage Landscape Conference USA Semifinals. Tip-off is set for Friday, Mar. 11 at 7:00 p.m. CT on Court A of the Ford Center at The Star.