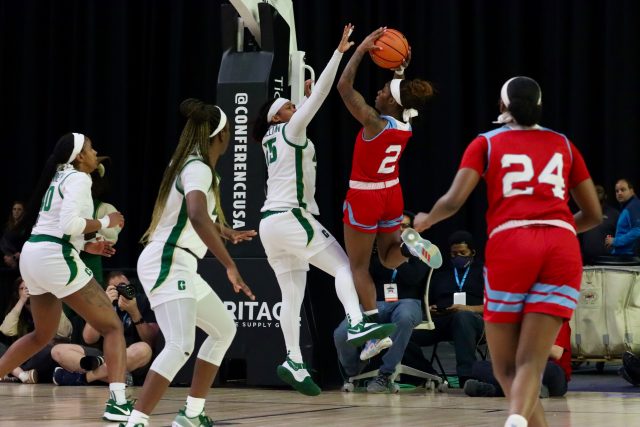 FRISCO, Texas – Louisiana Tech put everything they had on the line Saturday evening in the conference USA Championship game against Charlotte but fell just short of their first tournament title since 2010 (68-63) inside the Ford Center at The Star in Frisco, Texas.

In a reversal of scripts from the semifinal matchup the night before, Tech (21-11) got off to a great start in the first quarter holding Charlotte (22-9) to just three points on one field goal to take a 12-3 lead after one quarter.

In the second period of play, Tech was able to extend their lead to 15 (26-11) off an old-fashioned three-point play from Salma Bates with 5:47 left to play in the half. Charlotte responded with an 8-2 run to close the final four minutes, but Tech kept a nine-point advantage at the break (28-19).

Early in the third quarter, Charlotte continued to chip away and eventually gained their first lead of the game (38-36) with 1:20 remaining in the period. Charlotte would outscore the Techsters 19-10 in the quarter to knot the game at 38 with 10 minutes to play.

In the fourth, Octavia Jett-Wilson, the conference USA player of the year, started to heat up and built a seven-point lead for the 49ers (56-49) with 2:34 left in the game. Wilson scored 15 of her game-high 31 points in the fourth quarter.

The Lady Techsters continued to fight and cut the lead down to one possession (65-62) with 29 seconds remaining off two Lotte Sant free-throws, but three more Charlotte free-throws down the stretch kept the tournament title just out of reach for the Techsters.

Tech was once again led by Keiunna Walker and Anna Larr Roberson who were both named to the all-tournament team. Walker finished with 23 points, four rebounds, and three assists with another good night from the line going 9-12. Roberson completed her ninth double-double of the year with 17 points and 11 rebounds.

Over the three tournament games, Walker averaged 25.3 ppg and 4.3 rpg while Roberson averaged a double-double with 15.3 ppg an 10 rpg.

Salma Bates scored in double figures for the fourth time in five games and Amaya Brannon chipped in eight points.

Tech made a living in the tournament by taking care of the ball and rebounding. On the night, they once again cut down on their turnovers (12) but was out rebounded 38-25 by Charlotte.

Charlotte finished with similar numbers from the floor but had 12 more free-throw attempts (32-20) than the Techsters and made 10 of their 22 makes in the final minute.

• Charlotte extended their all-time series lead to 7-5 over Tech and even the neutral site series at 2-2.

• Keiunna Walker and Anna Larr Roberson were both named to the all-tournament team along with Charlotte’s Octavia Jett-Wilson and Mikayla Boykin, and North Texas’ Aly Gamez. Jett-Wilson was named the tournament MVP.

• Keiunna Walker has now scored double figures in 31 of 32 games this season and had her 13th game this year of 20-plus points. It is her fourth game in a row with 20-plus and sixth in the last seven games.

• She moved ahead of Cheryl Ford on the all-time Techsters scoring list for No. 27 with 1,385 points.

• Anna Larr Roberson posted her ninth double-double of the season and her 12th game with double-digit rebounds.

• Salma Bates scored in double figures for the 12th time this season and the fourth time in five games.

“I am incredibly proud of this team and the fight they showed tonight and all tournament long. I thought they were locked in and ready to play as they have been the whole season. Give Charlotte credit. I thought they made some good adjustments defensively in the second half and their experience took over late in the game. They made a few more plays than we did tonight. I’m so very grateful for this group and the ride they’ve taken us on over the last month. They have continued to show up for each other and represent our program and university with integrity. This young team gained incredible experience over the last month and during this tournament run. As hard as today is, I know this group has more basketball left to play and we look forward to getting back on the court with them this week as we prepare for the WNIT.”

The Lady Techsters will wait to learn their postseason fate after qualifying for an automatic bid in the 2022 WNIT field of 64. The WNIT will announce their field Sunday night on CBS Sports. It will be Tech’s first post-season big since 2017’s WNIT.