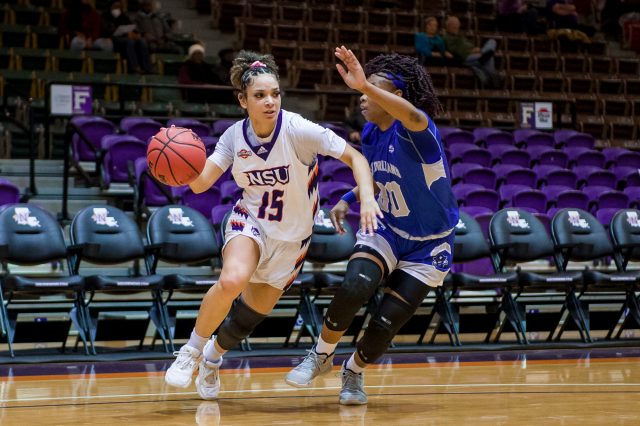 NATCHITOCHES – On several different occasions this season Northwestern State has accomplished something for the first time in more than five and sometimes 10 years. That list grew longer on Tuesday with the announcement of the All-Southland teams and individual awards for the 2021-22 season.

Candice Parramore led the trio honorees for the Lady Demons this season as the Southland Newcomer of the Year and earned a spot on the conference’s second team. Monette Bolden landed on the third team and Jasmin Dixon blocked her way to a spot on the all-defensive team.

Parramore is just the third Lady Demon to win the newcomer award in the Southland, joining legend Pam Hudson (1989) and Sebrena Smith (1993), the last to do it. Unlike Parramore, neither Hudson nor Smith were named to one of the two all-conference teams in those seasons.

Dixon is the first NSU player to earn a spot on the all-defensive team, which was first recognized following the 2012-13 season.

The Dallas native and two-time player of the week, Parramore led NSU in scoring with her dynamic ability to produce at all three levels. She put in a team-best 13.9 points per game, upping that to 15.4 during conference play, the fourth best totals overall and during league play.

She reached double figures in 12 of the 14 conference games this season with four 20-point games including back-to-back 23-point nights that earned her a second player of the week honor in the penultimate week of the season.

Bolden was equally as dynamic with the ball in her hands finishing second on the team in scoring at 12.1 points per game and leading the club with 3.2 assists per game.

The graduate transfer made immediate impact on the floor dishing out a career-high nine assists in just her second game for NSU. She accomplished the total again in conference play and had seven games this season with five or more assists.

She had one of her best two-game stretches during the middle of league play with consecutive double doubles, the first two of her career, against HBU and McNeese. She averaged 14.5 points and 12.5 rebounds in those two games.

The Abbeville native scored in double digits in 19 games, the most on the team, and had four games this season, two in conference play, with 10 or more points, five or more rebounds and five or more assists.

Dixon’s length and footwork around the basket made her a blocking machine this season for the Lady Demons.

She led the conference with 35 total blocks this season, 20 during league play, for a 1.4 block per game average. She recorded at least one blocked shot in 11 conference games this year including a streak of 10 straight.

She stuffed two or more in a game five different times against conference opponents and 10 times overall. She matched a career high with four blocks on two different occasions this season, both times against UIW.