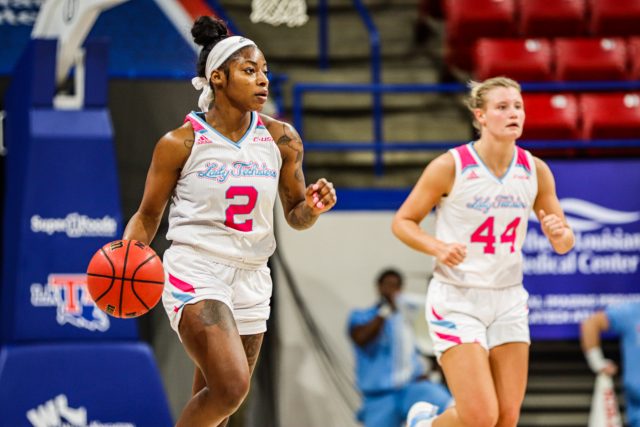 Walker, a junior guard from Lonoke, Ark., led the Techsters in scoring this season with 18.3 ppg on 41.8 percent shooting from the floor. She scored in double figures in 28 of her 29 games this season and scored 20 or more points in 11 of her outings including a career-high 32-point effort at UTEP.

Walker enjoyed a milestone season for the Techsters this year in which see surpassed career marks of 1,000 points, 100 steals, 100 assists, 100 charges taken, and 100 games played.

On Jan. 9 against Southern Miss, she became the 43rd member of the 1,000-point club and currently sits at No. 30 on the all-time Techsters scoring list with 1,309 career points recently passing the likes of hall-of-famer Teresa Weatherspoon.

Walker also registered the fourth triple-double in program history joining Tasha Williams, Shantel Hardison, and Angela with a 27-point, 15-rebound, 10-assist outing against Rice in a double-overtime thriller. It was the first 25-15-10 stat line in Techsters’ history.

The Lonoke native was also one of the best in the country this season at getting to the free-throw line finishing the regular season with 144 free-throw makes and 189 attempts. Her 144 makes led C-USA while her 189 attempts ranked her second. Both categories placed her in the top 15 in the NCAA.

Roberson, the local Ruston product out of Cedar Creek School, finished the season averaging 15.3 ppg and 8.6 rpg while posting eight double-doubles. Her points per game ranked third in the conference while her rebounds and double-doubles ranked second.

Roberson shot 52.8 percent from the floor, which ranked No. 3 in C-USA and was second in the league in free-throw percentage at 87.5 percent.

The Ruston native scored in double figures in 25 of her 28 games this season including her historical career-high performance of 44 points in the double-overtime win against Rice on 20-28 shooting. Her 44-point night is the fifth-highest single-game scoring output in program history while her 20 made field goals tied a program record set in 1975 by Belinda Jones.

She was also named conference USA and Louisiana Sports Writers Association Player of the Week Monday, Mar. 7 after averaging 25 points and seven rebounds in two wins last week over ODU and UAB. It was her first C-USA and LSWA Player of the Week honor of her career.

Walker and Roberson also anchored one of the best defenses in the conference that allowed a fourth-best 59.3 ppg and finished in the top three in turnovers forced (18.8), and top five in steals (8.8).

After an 0-4 start to league play, the Techsters finished the year with an 11-3 mark including winning their final four games to clinch C-USA’s West Division crown, the program’s first conference title since 2011, earning a one seed and double-bye in this week’s 2022 Heritage Landscape Supply Group C-USA Championships in Frisco, Texas.

The Techsters will play the winner of Western Kentucky and UAB this Thursday at 1:30 p.m. CT on Court A inside the Fort Center at The Star.