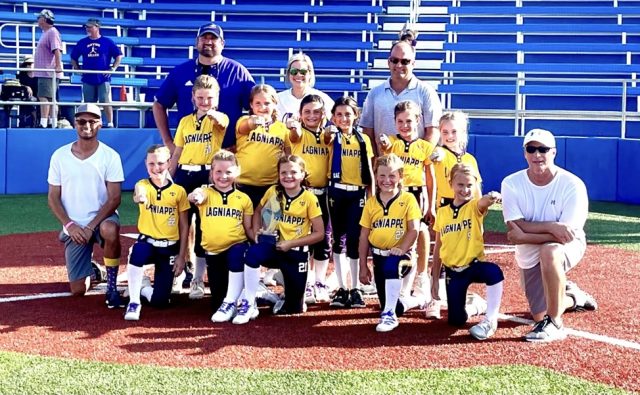 The Lagniappe, a Dixie youth softball team based in Benton, finished runner-up in the RAS 8-under division in the USSSA Louisiana State Championships held June 11-12 at the Ruston Sports Complex.

The Lagniappe is next scheduled to play in the Western Region Rec National Tournament at Tinsley Park July 5-9.

The team first came together in the fall of 2021 and then reunited in the spring.

“The countless hours that these coaches have volunteered for this team is such a blessing to these girls,” said Heather Glovier, mother of Haylee Glovier. “They are teaching them skills that go beyond the softball field. The amount of improvement that these girls have shown over the last year is phenomenal.

“As a team, these young ladies have shown a camaraderie worth mentioning. They respect and trust each other and it certainly shows on the field. They show a level of discipline and work ethic that is far beyond what is expected of an 8-year-old girl.”

The team went undefeated in the regular season.

At the Louisiana State Championships, the Lagniappe played seven games in two days in intense heat.

They got off to a slow start, losing two pool play games. But they came back strong in bracket play, defeating the Rusk Lady Eagles 14-3 in their first game.

They handed Bullard its first defeat, 17-11, in their second game before dropping a hard-fought 17-16 decision to the Bayou Belles.

The Lagniappe then advanced to the overall championship round, defeating Bullard again 18-14. They faced the Belles again and came up short, finishing runner-up.

“Benton, Louisiana, is beyond proud of these young ladies who are now making their name known across the Ark-La-Tex,” Glovier said.

Note: Coaches and parents can submit team photos with IDs and game details from tournaments to rhedges@bossierpress.com. Please include the name of the tournament and when and where it was played along with the age division.