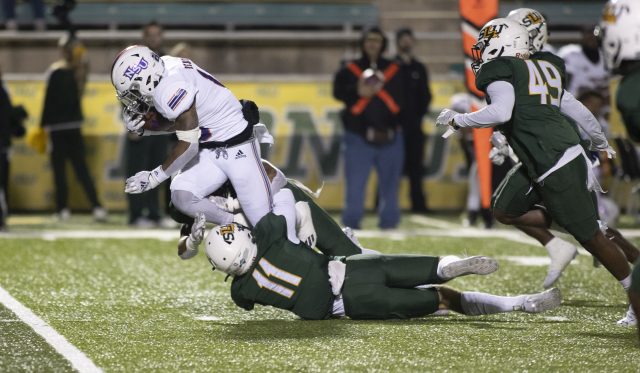 Forcing the Lions into third-and-long situations did not work well for the Demons, however, as SLU answered every challenge with one big play after another, setting the tone for a 56-28 Southland Conference victory at Strawberry Stadium.

“Getting behind the eight-ball so quick, down 21-0, we were able to get a drive going at the end of the half,” fourth-year head coach Brad Laird said. “We didn’t have that many possessions offensively, especially in the first half. They scored five of their first six possessions, but I was proud of the guys who prepared the right way and continued to fight for 60 minutes.”

The short-handed Demons (2-8, 2-5) surrendered 309 first-half passing yards to the Lions (8-2, 6-1), who tallied a pair of big-play touchdown passes from reigning Walter Payton Award winner Cole Kelley in the first 18 minutes of the game.

Northwestern State moved the ball well early in the first half but did not dent the scoreboard until quarterback Kaleb Fletcher, starting in place of injured Zachary Clement, capped a 10-play, 84-yard march with a 1-yard touchdown run at the 7:35 mark of the second quarter.

The score was one of four touchdowns Fletcher accounted for in his first start since Oct. 16. He added third-quarter touchdown passes of 35 yards to Kendrick Price Jr. and 6 yards to Robbie Williams III before capping NSU’s offensive day with a 3-yard touchdown run in the fourth quarter.

Fletcher finished the game 22-for-36 for 226 yards, two touchdowns and two interceptions.

The Demons found themselves down 35-7 at the half after Southeastern executed a two-minute drill for a touchdown for the second time in as many meetings with Northwestern State this fall.

This time, Kelley ended a quick-strike, eight-play, 76-yard drive with a 9-yard touchdown pass to Anthony Spurlock with 4 seconds before halftime.

The Demons emerged from halftime re-energized as Curtis Williams ripped off a 29-yard run to start the half and Fletcher found Price in the front of the end zone two plays later.

Williams carried the load on the ground for the Demons, setting a career high with 96 yards on 11 carries and added a 10-yard catch. He became the third Demon rusher to eclipse the 90-yard mark this season, joining Scooter Adams (92 at North Texas) and Clement (96 vs. Southeastern on Oct. 23).

“Guys just came in and told us to keep our head down and keep going forward,” Williams said. “Everyone’s been battling. The O-line’s been hit with injuries the most, and to see them do what they did tonight is a credit to them and to (offensive line) coach (J) Pond.”

Despite giving up 21 second-half points, the Purple Swarm defense kept the game from getting further out of reach by forcing a pair of fumbles, including one at the goal line in the final quarter.

Northwestern State’s offense was unable to capitalize on that one, but the Demons did convert after Shemar Bartholomew punched the ball free from Gage Larvadain and Junior Brown recovered at the SLU 44.

“That was good to see in the second half,” Laird said. “We had two fumble recoveries, one leading to points. In these types of games, you have to create takeaways and, when you create takeaways, you want to get points out of them. We were able to do that.”

The Demons conclude the season with their second straight road game, traveling to Lake Charles for a rematch with McNeese on Nov. 20. Kickoff is set for 12 p.m. at Cowboy Stadium.