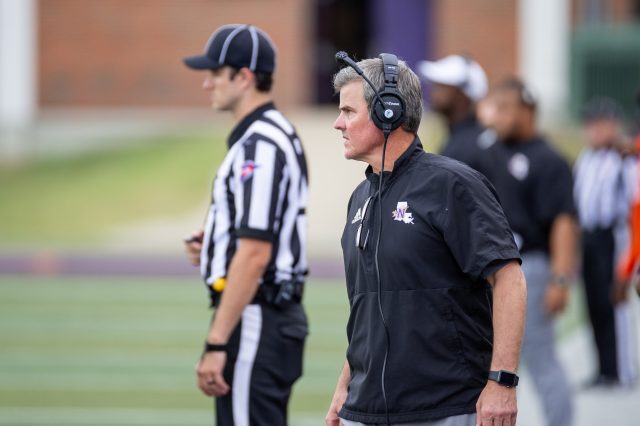 NATCHITOCHES – Every year, spring football brings about a fresh vision of the future.

“It’s as important a spring practice as we’ve had since I’ve been here,” said head coach Brad Laird, who begins his fifth season at the helm of his alma mater in September. “Schematically, we’re different on both sides of the ball. The terminology will be different. For our guys, it’s one thing to be in a meeting setting. It’s another thing to be on the field and to be able to walk through things. And it’s another thing to go full speed, good on good.”

Northwestern State will have 15 total practices and scrimmages in the spring, culminating with the Joe Delaney Bowl on April 9.

The Demons begin spring practice with new coordinators on both sides of the ball and four new coaches in all.

Offensive coordinator Cody Crill and defensive coordinator Weston Glaser will use the 15 workouts to install the foundation of their side of the ball while the Demons also added quarterbacks coach Kyle Washington and inside receivers coach Manny Harris to the staff.

Joey Fitzgerald, who coached quarterbacks in the 2021 season, has moved to wide receivers coach.

“A lot of things have changed since the last time we walked off the field against McNeese,” Laird said. “We’ve got through some coaching changes in all three phases as well as added some new faces who have been brought in over the last couple of months. Our guys have worked extremely hard in the offseason.

“We’ve had a good run since January. (Strength and conditioning) coach Erik (Schwager) has done a great job with those guys. We’ve been able to get out there and do some mental things from a football standpoint, but to be able to put the ball down and have 15 good days of practice and finish with the spring game on April 9, we’re excited and ready to see our guys in action.”

Northwestern State returns 47 lettermen from the 2021 fall season, which ended with two wins in the final three games, including a 24-20 victory at McNeese in the season finale – NSU’s first win in Lake Charles since 1988.

“We’re not just looking at the new guys who came in the early signing period or the guys who have enrolled in the last couple of weeks,” Laird said. “You also look at the step our young guys are going to make – whether they were freshmen last year or they are guys who have been here but not been on the field yet. There are a lot of different areas we’re looking forward to watching our guys grow schematically in what we’re doing in all three phases.

“We can’t waste a day with the opportunity we have this spring to find consistency in all three phases. Are going to have all the answers after 15 practices? Probably not. That’s what the summer is for. That’s what fall camp is for. We want to be one step closer to where this football team is going to be when we play Montana in September.”